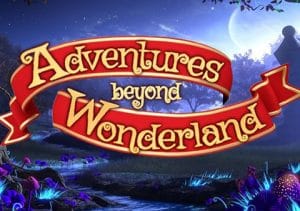 WHERE TO PLAY Adventures Beyond Wonderland SLOT

Adventures Beyond Wonderland is a 5 to 7 reel, 243 to 2,187 ways to win jackpot video slot which is powered by Ash Gaming. Following on from Adventures in Wonderland, this game can be played from 30p to £150 per spin on desktop, mobile and tablet devices. Based loosely on Lewis Carroll’s Alice’s Through The Looking-Glass, it has a fairy tale theme and has plenty of bonus features.

Visually, it’s rather enchanting as you’d expect with brilliant 3D animated graphics – I particularly the caterpillar who sits perched on a mushroom to the right of the reels. Symbols on the reels include A, K, Q and J playing cards, teapots, the Mad Hatter’s hat, bubble pipes, pocket watches and crowns. Alice is the wild symbol and replaces all other symbols bar the Free Games symbols.

Onto the features – you have the Caterpillar Bonus Bubbles feature. As mentioned, the caterpillar to the right of the reel set can randomly blow a bonus bubble over reel 4 on any spin. During any spin, any bonus bubbles above the reels will move 1 position to the left – the bonus bubble disappears when it shifts away from reel 2.

Alice then falls down onto 1 of the 3 middle reels to give you a fully wild reel. When Alice falls over a bonus bubble, she bursts it and thus rewarding you with the prize inside – this includes coin prizes, question marks which can give you multipliers up to 10x and jackpot symbols to win you the progressive jackpot!

There’s also a magic potion in the bonus bubbles – if Alice pops a bubble with a magic potion in it, she grows 2 or 3 reels wide creating up to 2 extra reels full of wilds! Therefore, you will be playing with 7 reels which gives you 2,187 ways to win!

Look out for the Cheshire Cat wild symbols as they can randomly appear on any free spin and lock in place – they can also expand up to 3 symbols wise pushing other symbols aside to expand the reel set.

Adventures Beyond Wonderland is a superb video slot from Ash Gaming – graphically, it’s 1 of the best we’ve ever come across as it perfectly depicts the theme. The features aren’t bad either with the potential 10x multipliers in the base game coming in handy.

I really like the Cheshire Cat Free Games feature due to the locked and spreading wilds which can really boost your winning potential. The hope is that you win the progressive jackpot so hope you get the jackpot symbol in the Caterpillar Bonus Bubbles feature.