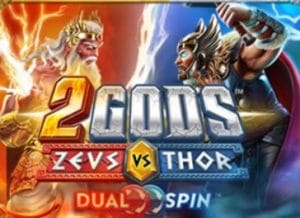 WHERE TO PLAY 2 Gods Zeus vs Thor SLOT

Deities from ancient Greek and Norse mythology go head to head in the 2 Gods Zeus vs Thor slot, an innovative release from 4ThePlayer. This volatile slot uses a 5 reel, 2,048 ways to win game engine. The unique Dual Spin mechanic means you’ll have 2 spin button to choose from. Matching the right spin and win colour will double payouts. There’s also a Win Spins feature with a guaranteed winner on each of them. Also in play during the feature are multipliers that can only rise. Mobile players can also take advantage of the Big Reel Portrait more. Find out more in our 2 Gods Zeus vs Thor review. The epic theme in the 2 Gods Zeus vs Thor slot comes with design to match. It features Zeus from Greek mythology and Thor from Norse mythology. You can find out more about all types of mythology here. The visuals here are very impressively done. The imagery here has a comic book feel and is superbly drawn and packed full of detail. It looks great.

On the reels you’ll see A, K and Q symbols alongside a helmet, a boat, a dog and a goddess. Each symbol comes in red and blue incarnations. There are also red and blue Zeus and Thor wilds. These substitute for all the standard symbols and pay 10 x your bet if you land 5 in combination (not factoring in any multipliers).

If you’re playing 2 Gods Zeus vs Thor on your mobile you can take advantage of 4ThePlayer’s BIG REEL Portrait Mode. The reels here are 60% bigger than in standard mode and the imagery is that much clearer on a small screen device.

The gameplay and features remain the same though. The reels spin right to left though and pay top to bottom. The BIG REEL Portrait Mode can be found in all 4ThePlayer slots including 9k Yeti and 1 Left Alive.

The 2 Gods Zeus vs Thor slot has 5 reels, 4 rows and 2,048 ways to win. Even though it is a 1,024 ways to win slot, there are 2 symbols set paying left to right and right to left. This doubles the number of ways to win. A win is formed when matching symbols appear on successive reels starting from either reel 1 or 5.

Stakes start at 10p per spin, rising to a maximum of £20 per spin. There are autoplay options as required such as single win limits and loss limits.

This battle between the mythical gods is a fiery one when it comes to variance. The 2 Gods Zeus vs Thor volatility is high. It has a hit rate or frequency of 25% which gives you a win every 4 spins on average.

4ThePlayer is a developer that likes to do things a little differently. That’s definitely the case with the 2 Gods Zeus vs Thor slot which is packed with unusual gameplay. That starts with the Dual Spin feature/mechanic and goes right through to the free spins feature. The reels in 2 Gods Zeus vs Thor are made up of red Greek-themed and blue Norse-themed symbols. The red symbols pay left to right and the blue symbols from right to left. Winning combinations are created by landing matching symbols on adjoining reels. They both offer 1,024 ways to win for a total of 2,048 winning chances each spin.

Known as the Dual Spin feature, you’ll have the pick of choosing a red or a blue spin button on each spin. If you land a winner made up the same colour symbols as the spin button, your payout gets a 2x multiplier boost and is doubled.

For example, spin with the red button then land 3 of the red goddess symbol on adjoining reels from reel 1 and the standard 1.5 x stake payout rises to 3 x stake. If you’d spun with the blue button and landed that same combination, the payout would be 1.5 x stake (no multiplier). Here’s a table showing how the wins work: The good news once you’ve been awarded your free spins is that every free spin is guaranteed to deliver a winning combination.

On each free spin, you get to choose whether to spin with the red or blue spin button. If you land a win made up of matching symbols, a multiplier increases by 1 (the round starts at 1x). This rises throughout the round infinitely.

Unlimited retriggers are possible here too which means that the potential multipliers can get very high indeed. This is the key to winning big in 2 Gods Zeus vs Thor.

At first glance, this mythological mash up looks rather complicated. It’s pretty straightforward when you get stuck in though. The gameplay is rather unusual but none the worse for that.

It’s volatile too with potential maximum payouts of over 15,000 x your bet on each spin. The big wins will come in the Win Spins feature due to the multiplier that can only rise. The RTP stacks up well though at 96.5%.

You’d think that the ancient theme had been done to death. This merging of Greek and Norse mythology works well. If you like the legendary theme, the 2 Gods Zeus and Thor slot is well worth a closer look. You should also take a look at 4ThePlayer’s 6 Wild Sharks slot which also uses a unique game mechanic.

What is the 2 Gods Zeus vs Thor RTP?

The 2 Gods Zeus vs Thor return to player rate is an above average 96.5%. That compares favourably with many slot games. It has a hit frequency of 25% (meaning a win every 4 spins) and is high variance.

What is the 2 Gods Zeus v Thor max win?

You won’t win all that often but the rewards can be large when you do. The maximum payout is 15,360 x your total bet per spin which will come in the Win Spins feature as the multiplier can increase infinitely.

What is Dual Spin?

With the Dual Spin feature, you’ll have the choice of using a red or blue spin button. Land a winner in the base game that’s made up of same colour symbols as the spin button and the payout gets a 2x multiplier boost. In the Win Spins feature, it increases the win multiplier by 1 each time.

Is there a 2 Gods Zeus vs Thor free spins feature?

Yes, trigger the Win Spins feature and you’ll receive 7 or 10 free spins. You’re guaranteed to see a winner on each spin. A winning spin where the symbol colour matches the spin colour results in an increase to the multiplier which starts at 1x but can keep on rising.