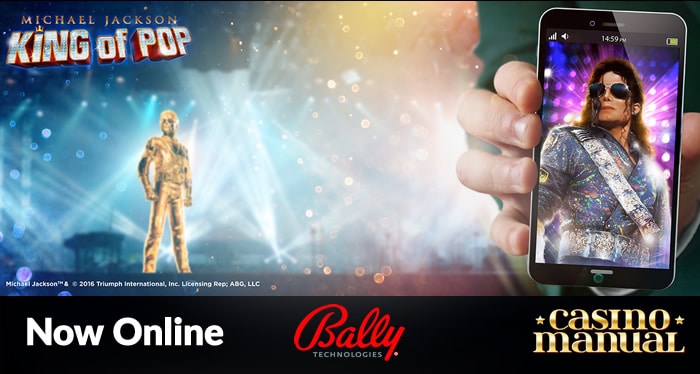 Will the King of Pop become the King of Slots? Bally Technologies has today released Michael Jackson King of Pop which is already a huge land based hit (excuse the pun).

The 5 reel, 25 payline video slot is based on the King of Pop himself as he makes his online version. Hugely anticipated, it can be played on desktop, mobile and tablet devices from just 40p per spin. As for Michael’s songs, it features Beat It, Billie Jean, Dirty Diana, Bad and Smooth Criminal as it’s soundtrack – not bad right?

There are 2 randomly triggered base game bonus features – you have the Moonwalk Wilds feature where up to 5 symbols will transform into wilds for 1 spin. Wins are also doubled when part of a winning combination. Then there’s a Stacked Wilds feature where 2 reels become entirely wild randomly.

With wins of over 3,000 times your stake available on each free spin, this is a great video slot which will surely prove very popular online (as it has in land based casinos). For more details, read the Michael Jackson King of Pop video slot review.

You can play Bally’s new branded title at Mr Green Casino who also have a great promotion regarding the game – you can win tickets to the Michael Jackson ONE show, flights to Las Vegas and 3 nights’ accommodation at the Mandalay Bay Resort and Casino for 2 people by playing the new slot.

You have until the 5th of June to accumulate as many tickets as possible – you can do this by simply wagering £10 on Michael Jackson King of Pop. When you sign up, you will get 20 Jimi Hendrix no deposit free spins – this is exclusive to CasinoManual.co.uk readers. There’s also up to £100 free and 100 Marvellous Mr Green free spins once you deposit.