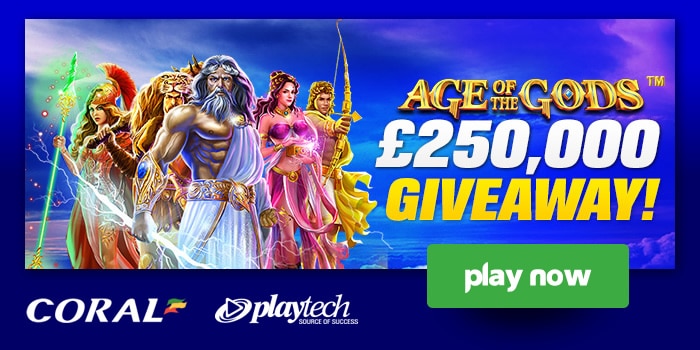 Playtech are celebrating the launch of the first 3 Age of the Gods video slots by giving away a whopping £250,000 in cash prizes.

You can join in the celebrations by play Age of the Gods, Age of the Gods Furious 4 or Age of the Gods King of Olympus before the 20th of July 2016. You will receive 1 entry for every £10 you wager on either video slot, via your mobile, tablet or desktop device.

The promotion is split into 3 periods with 1 of the Age of the Gods games giving you 2 entries in each of the periods:

Age of the Gods Furious 4

With 5 reels and 20 paylines, it focuses on Prometheus, Apollo, Pandora and Atlas. The game is all about the Free Games feature where you get 12 free spins. There are 4 Furious features to play, each representing the gods mentioned – they reward you with expanding Apollo symbols, locked Prometheus symbols, frozen Atlas symbols and Pandora increasing multipliers. Read the Age of the Gods Furious 4 video slot review.

Age of the Gods King of Olympus

With 5 reels and 25 paylines, it’s based on Zeus. Like Furious 4, it’s all about the Free Games feature where you will receive 10 free spins. You begin with a 2x multiplier and with every 2 free spins, the multiplier increases by 1 – this means the last 2 free spins are subject to a 6x multiplier. There’s also a frozen Zeus wild in the middle of reel 3. For more details, read the Age of the Gods King of Olympus video slot review.

With 5 reels and 20 paylines, this is the best one by a country mile! Featuring Athena, Hercules, Poseidon and Zeus, there’s a Pantheon of Power On Reels feature where all 4 gods and Hades line up to give you a cash bonus. However, the Age of the Gods Bonus feature gives you access to 4 free spins features – each based on the gods mentioned. You can get up to 5x multipliers, up to 5 wild symbols on each free spin, increasing multipliers and expanding wilds – you can also play the features multiple times as long as you don’t uncover Hades. For full details, read the Age of the Gods video slot review.

You can play all 3 Age of the Gods video slots and take part in the promotion at Coral Casino – they welcome CasinoManual.co.uk readers with an exclusive signup offer. Basically, you can deposit just £20 to get £100 free – that’s a massive 500% first deposit bonus! If you play regularly, you’ll be happy to learn they process cashouts within 12 to 24 hours, including weekends and via various payment options including PayPal, Skrill and NETeller.