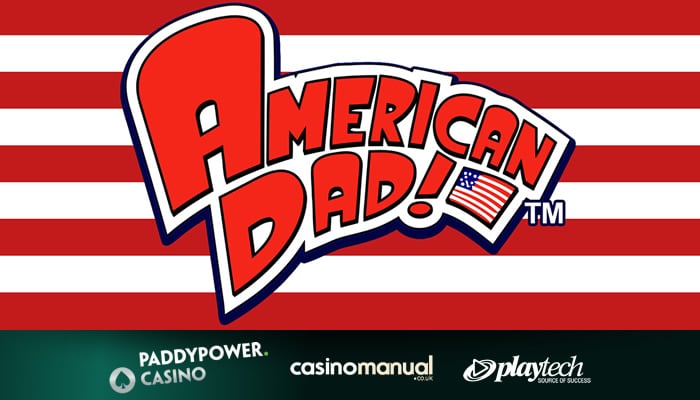 If you’re a fan of the cult animated TV comedy American Dad then you should head on over to Paddy Power Casino which has just launched Playtech’s video slot version.

Produced by Playtech in association with Fox, it’s an anarchic 5 reel, 40 payline game that’s brimming with features based on Stan and the Smith family.

To trigger those bonus features, you’ll need to land the usual 3 or more scatters. In return, you’ll get to spin the gloriously named Schmooblydong Bonus Wheel. Up to 25 free spins are on offer plus a modifier extra based on 1 of characters from the show. They include:

Seth McFarlane’s comedy has a madcap feel and that’s certainly true of the video slot version. The design is excellent though, looking just like the TV animation itself. There’s a cracking variety of features here too, offering a little something for everyone. If you like plenty of bonuses from your game, then American Dad certainly fits the bill.

Fans of the cult TV show should find plenty to like here. Even if you’ve never sampled the delights of Stan and the rest of the gang the range of extras makes American Dad well worth a spin – check out the American Dad! video slot review.

There’s never been a better time to do so at Paddy Power Casino as you will get £10 free for just signing up. We’ve also teamed up to offer new players an exclusive welcome package as new arrivals can benefit from an exclusive 400% bonus worth up to £500.