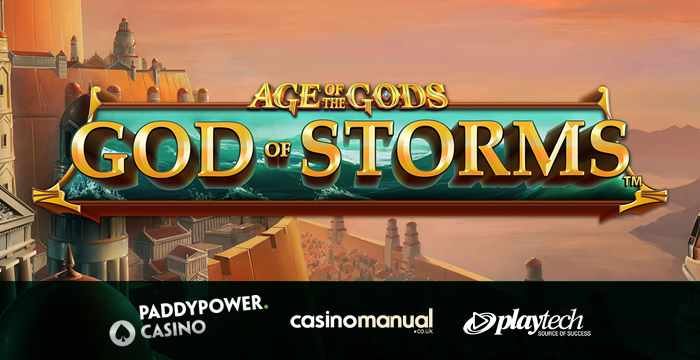 Age of the Gods God of Storms is the 7th video slot from the series to be released by software giant Playtech – it’s based on Aeolus who was the divine keeper of the winds. With 5 reels and 25 paylines, you can play the game from just 25p a spin on desktop, mobile and tablet devices.

Visually, the game looks superb as you overlook an ancient port city – the mythical, floating island of Aeolia. Age of the Gods God of Storms is all about the Wild Wind Respins feature which is played when the mighty ship wild lands fully stacked on any of the 1st 4 reels.

You will then be rewarded with a free re-spin with the stacked wild being blown 1 reel to the left – the re-spins continue until you have a re-spin once the stacked wild has fallen off the reels. Furthermore, the multiplier increases to 2x, 3x and finally 5x to enhance your winning potential.

I’ve managed to trigger the feature with stacked wilds on both reels 3 and 4 which resulted in a God-like win of just under 700 times my total stake. As part of the Age of the Gods series, there’s 4 progressive jackpots to be won at random – the Ultimate Power jackpot currently offers you just over £150,000! For more details, visit the Age of the Gods God of Storms video slot review.

Sign up now at Paddy Power Casino to get £10 completely free – that’s £10 as soon as you register. Then there’s a 3-part welcome offer which you can get up to £500 free. 1 thing to note – you’ll appreciate (if you play regularly) that they process cashouts within 4 hours to e-wallets such as PayPal, NETeller and Skrill.