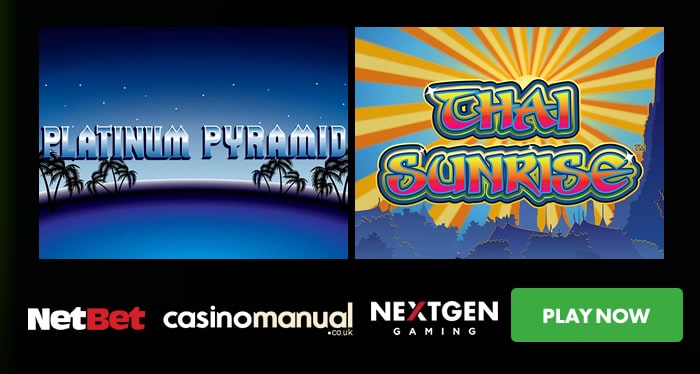 A journey back to the land of the ancients or a trip to one of Asia’s most exciting countries are now on offer at NetBet Casino which has just launched the Platinum Pyramid and Thai Sunrise video slots.

The most rewarding symbol is the priestess wild which offers awards of 350 times your total stake if you’re lucky enough to land a 5-of-a-kind winner.

The best winning potential in this Arabian adventure comes via the Free Games feature which offers 5, 10 or 15 free spins depending on how many scatters triggered it. Helping your chances of landing a pyramid sized win is a 3x multiplier which trebles all payouts during the feature – you can also retrigger to get up to 30 free spins.

The second new release, Thai Sunrise, also comes from the NextGen Gaming stable. It’s a 5 reel, 25 payline game that comes with simple design and a potentially hard-hitting feature. Joining the lower value playing cards are tuk tuk bikes, lotus flowers and grand statues. Most rewarding is the Thai girl who is the wild – land 5 of her in a row and you’ll win an award equal to 240 times your total stake.

Just like Platinum Pyramid, there’s a single feature round on offer in Thai Sunrise. Triggered in the usual manner by landing 3, 4 or 5 scatters, you’ll receive a payout of 5, 20 or 100 times your stake as well as 15 free spins. Once again, a 3x multiplier is on hand throughout the feature to boost your winning chances. Re-triggers are possible here too.

Neither game is especially flashy on the design front but both deliver simple, fast-paced, volatile action. If that sounds like your type of game then head on over to NetBet Casino. New players can help themselves to a welcome package that offers 25 no deposit free spins (code NETBET) as well as a 100% first deposit bonus up to £200.