The MegaWays game engine has become very popular and NextGen Gaming have announced that they will be releasing Medusa MegaWays – it combines the legendary character with MegaWays for potentially explosive release.

There will be a Medusa’s Gaze feature where Medusa expands to turn the whole reel below into a wild reel – with the reactions, you will be able to benefit from various wild reels. It will be all about the Free Games feature where you start with a doubling multiplier – each reaction will increase the multiplier by 1 to give you an unlimited multiplier.

Furthermore, soldiers will appear above the reels which, if bitten by snakes, transform into Medusa for wild reels. It can also change into scatters to reward you more free spins. Once over, the Temptation feature will kick in – this gives you the chance to play the feature again if you’re not happy with the payout. Medusa MegaWays promises to be the best Medusa video slot to date with potential wins of 10,000 times your bet on each spin/free spin – prior to its release, watch the YouTube trailer below:

In the meantime, I recommend you try the previous Medusa games – there’s Medusa, Medusa II and Medusa II Jackpots. The best of the 3 is Medusa which was released way back in 2009! With 5 reels and 25 paylines, it comes with respins with a trebling multiplier, a free spins feature with 2x multipliers and a Pegasus Bonus feature where you make picks to win cash prizes. It’s all about the Super Spins feature where you’ll benefit from a 5x multiplier – this can lead to wins of 25,000 times your bet on every one of them!

All 3 current Medusa video slots can be played at Mr Green Casino – sign up now to get 20 no deposit free spins on NetEnt’s Starburst. There’s also a 100% match bonus up to £100 plus 200 more bonus spins. 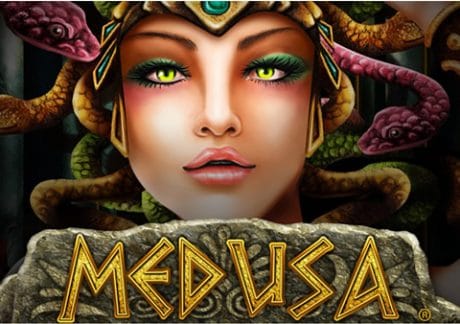