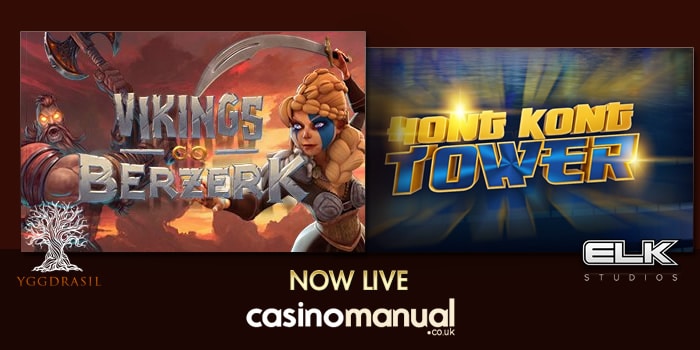 Vikings Go Berzerk has been released in the UK by Yggdrasil Gaming and comes with 5 reels and 25 paylines. Playable on all devices from 25p a spin, it’s a sequel to the much-loved Vikings Go Wild. There’s Treasure Chest and Golden Treasure Chest symbols which reward you with cash bonuses, free spins, a Rage Boost or give you entry to the Ragnarök Free Spin feature.

The Free Spin feature rewards you with up to 21 free spins and also comes with sticky wild symbols. There’s more free spins to be won as well as starting wild/wild reels, 5 treasure chests and 5 Golden treasure chests before the free spins commence. There’s also a Viking Rage feature where the Viking goes berzerk and defeats the siren which fills the Viking’s rage meter. The Ragnarök Free Spin feature sees all vikings go berzerk which turns them into wilds! For more details, check out the Vikings Go Berzerk video slot review.

Hong Kong Tower, from ELK Studios, is available to play on all devices from just 20p a spin and has 5 reels and 99 paylines. Based on the biggest light and sound show in the world, there’s a Mystery feature where the Hong Kong Tower logo symbol changes into any other symbol to enhance your winning potential.

It’s all about the Wheels of the Sky Bonus feature where you spin the wheels to win cash sums – you can get up to 5 lives where you aim to reach to 3rd and final wheel which can give you cash prizes of up to 500 times your total bet! With a whopping 3,106 times your total bet to be won in this feature, make sure you read the Hong Kong Tower video slot review for more details of this high variance offering.

Both video slots are playable at Mr Smith Casino – they are UK focused and have games from many providers like NetEnt, IGT, WMS, Play ‘N Go and NextGen Gaming amongst others. As a CasinoManual.co.uk reader, you are welcomed with an exclusive 200% match bonus up to £200 plus 50 Starburst free spins.