January 2020 NetEnt’s Planet of the Apes Arrives at CasinoRoom 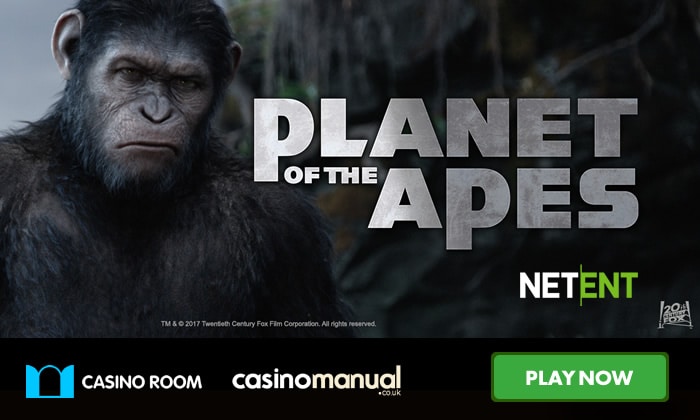 One of the most successful movie reboots of recent years has been the Planet of the Apes franchise. The latest incarnation of films has spawned a video slot too which is now live at CasinoRoom.

Created by Scandi developer NetEnt alongside movie studio 20th Century Fox, it’s a 10 reel, 40 payline game that comes with cracking sound and visuals and a nice range of extras. The game is played over 2 machines – 1 is based on Rise of the Planet of the Apes, the other on Dawn of the Planet of the Apes. Each reel set offers 20 paylines and features an assortment of playing cards, 3 characters from the film plus a pair of apes as well as its own wild and scatter.

Just like the set-up, the bonuses here are a little unusual, starting with the Dual feature – 1 symbol is chosen on each side. If it lands on the spin that follows, it’s held and a re-spin is awarded. If the Dual symbol lands on the rise side, it’s transferred to the other side and vice versa. The re-spins continue until no new chosen symbol lands.

Each side also offers a special bonus award when a certain symbol lands on a specific reel. Cash awards and transforming symbols are on offer here. Land a stacked wild on Rise machine and it will duplicate itself and appear in the same position on the Dawn set.

Each machine also awards its own Free Spins feature. On the Rise side, 10 free spins are awarded. Every wild you land is collected. They’re then dropped onto the reels on your final spin. It’s a 15 free spin haul on the Dawn machine – fill the meter to add extra free spins, multipliers and extra wilds into play.

This is certainly a bit of a departure for a branded video slot which often play things relatively safe as far as gameplay goes. The twin reels are certainly different so a few spins in demo mode should get your eye in. Once you have got used to the layout, there’s plenty to enjoy here, especially the Dual re-spins which are a very tidy addition.

The sound and visual specs are just what you’d expect from a big budget tie-in so no complaints on that score either. Whether or not you’ve seen the film, the Planet of the Apes video slot is certainly worth a viewing. You can also watch all the features in action via NetEnt’ official YouTube trailer below:

Take it for a spin at CasinoRoom where new players can choose from 3 welcome packages – you have a choice of 3 offers on each of your first 5 deposits!

Play NetEnt’s Planet of the Apes at CasinoRoom