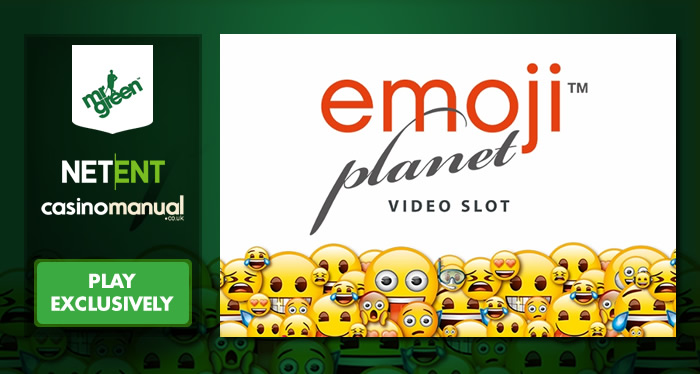 Mr Green Casino has added to their collection of video slots with the exclusive arrival of Emoji Planet – find out more below.

The latest release comes from NetEnt and features the Scandinavian developers’ usual high-end design. Emoticon images dropping onto the reels include hearts, bombs, pizzas, lips, rockets, turds, aliens, a smiley and a gold star which is the wild.

The game is played using a 6 reel, avalanche reels game engine. After a successful spin, the winning symbols are blasted away and new symbols drop in their place. The avalanches continue as long as a new winning combination is created.

Emoji Planet comes with a range of 5 features which are triggered when you fill a meter to the right of the reels. Depending on which emoji meter if filled, you’ll win 1 of the following extras:

Take it for a spin exclusively at Mr Green Casino where CasinoManual.co.uk readers can help themselves to an exclusive welcome package. 20 Gonzo’s Quest free spins are on offer just for registering. Deposit between £20 and £100 and it will be doubled. You can also look forward to 100 free spins on Starburst plus 5 free spins every day for the next 20 days (on other NetEnt titles)