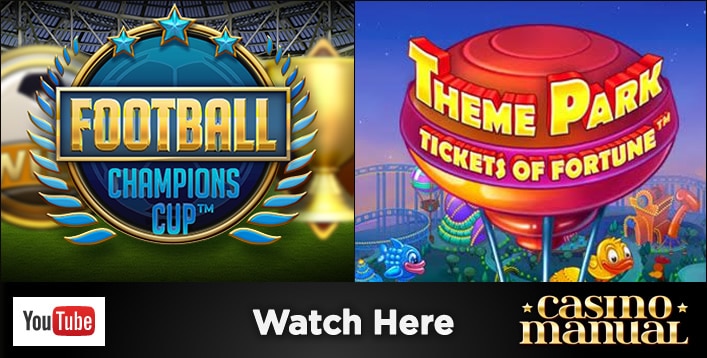 Net Entertainment has been busy today as they’ve upload trailer of their 2 upcoming video slots on their YouTube channel – watch them here at CasinoManual.co.uk.

Football: Champions Cup will be released on the 23rd of May – just in time for Euro 2016 which takes place in France this summer. The game will have 5 reels and 20 paylines and will be playable across all devices. With an obvious football theme, expect boots, shirts, ref’s whistles and players on the reels.

There’s a Bonus Game feature which will have a penalty shootout format – you get to take 5 penalties and well as trying to save 5. If you score your penalties, you’ll win cash prizes with penalties saved giving you multipliers up to 15x.

There will be a Free Spins feature which simulates the knockout stages of a football tournament – you start with 6 free spins. Blue wilds give you a goal and red wilds see you concede one – if you score more than your opponents, you progress to the next round with more free spins on offer.

There’s 24 free spins to be had if you win the final, you will also win 500 times your stake! To see Football: Champions Cup in action, watch the official YouTube trailer below:

Theme Park: Tickets of Fortune will be live on the 22nd of June and will have 5 reels and 50 paylines. You will get to experience all the fun of the fairground in this bonus feature-rich offering. Again, it’s playable on all devices with carousel horses, swan boats and bumper cars on the reels.

As well as stacked wilds, there’s a Claw feature where the crane grabs a stuffed toy from below the reels to give you a cash prize. There will be a Theme Park Ticket Wheel where you collect tickets to play 1 of 6 bonus features – there’s duck shootings, skee balls, fishing, can towers, sledge hammers and punch bags – all give you cash prizes.

There will be a Theme Park Bonus Wheel where you can win cash prizes, trigger any of the 6 bonus features or tickets for the Theme Park Ticket Wheel. Very colourful and fun, watch Theme Park: Tickets of Fortune in action via the official YouTube trailer:

If you love NetEnt slots, you can play them all at CasinoRoom – the instant play casino only has Microgaming titles. You can play favourites such as Microgaming’s Immortal Romance and NetEnt’s Piggy Riches as well as the psychedelic-themed Jimi Hendrix (from NetEnt).