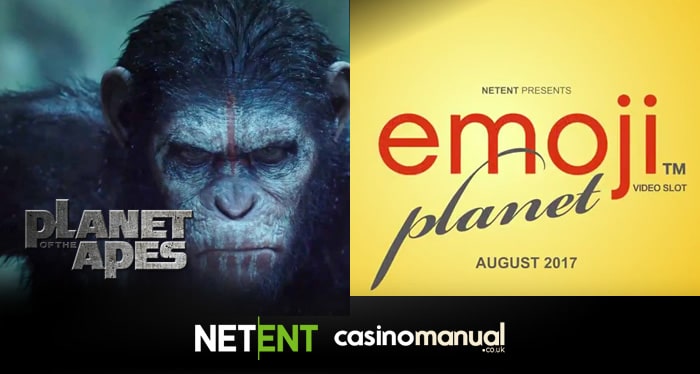 Net Entertainment has revealed they are to launch 2 new branded video slots later this year – find out more about Planet of the Apes and Emojiplanet.

Planet of the Apes

Announced at the ICE Totally Gaming 2017 conference last week at the ExCeL in London, Net Entertainment has teamed up with 20th Century Fox Consumer Products to exclusively license the Planet of the Apes film franchise for use in online video slots.

NetEnt’s Planet of the Apes slot is set to create a huge buzz among film fans and players when it is released in the second half of 2017. The game will feature stunning graphics and unique game mechanics that will bring to life the power and excitement of the brand. Speaking of the agreement, NetEnt’s Chief Product Officer (Simon Hammon) commented:

“Planet of the Apes is one of the largest film franchises in the world never to have been applied to gaming before. With such a rich history, the brand resonates with everyone that has grown up with the films, and it will fit perfectly with NetEnt’s wide and divers player base. We are thrilled to have signed the franchise, and can’t wait to offer the game to players later in the year.”

Also, announced at ICE Totally Gaming 2017 last week, NetEnt will launch Emojiplanet – the game is based on Emojis with the agreement done with Global Merchandising Services & The emoji Company. It will also NetEnt to bring the popular icons to life in an online video slot format.

Emojis are used every day by billions of people in text messages and other forms of instant communication adding colour and graphics to methods such as iMessage and WhatsApp. This will allow NetEnt to offer a new and unique social gaming element to the online gaming space.

Emojiplanet will be released in August this year and coincides with the launch of the anticipated film, The Emoji Movie. Simon Hammon (Chief Product Officer at NetEnt) commented on the agreement:

“As a leader in both mobile online gaming and innovation, Emojis is a perfect fit with NetEnt. Every day, millions – if not billions – of people around the world enjoy using Emojis. They have become a language in their own right; it is hard to think of a more collectively familiar and loved brand to partner up with.”

Net Entertainment is one of the biggest and most successful software providers in the online gaming industry focusing mainly on video slots – they have superb games like Dead or Alive, Blood Suckers, Starburst, and Warlords: Crystals of Power as well as branded content like Dracula, Aliens, Scarface and South Park.

I recommend you play NetEnt video slots at CasinoRoom – they also offer you titles from WMS, Barcrest and Microgaming (amongst others). Sign up now to get 20 no deposit free spins on NetEnt’s Starburst as well as a 100% match bonus up to £500. Once you deposit, you will get 180 more Starburst free spins (spread over 9 consecutive days).