Net Entertainment have released a video trailer for the upcoming Neon Staxx slot game on their YouTube channel – watch it below and find out a little about it.

Neon Staxx is due for release on the 24th of June but NetEnt has added a video preview of the game on their social YouTube channel. The slot will be available to play on mobile and tablet devices as well as desktop – this seems to be the norm now for their releases.

Anyway, it has 5 reels and 40 paylines and can be played for as little as 20p a spin. It comes with a banging 80’s retro theme with neon colours and a synthesizer soundtrack. Gameplay wise, it plays out very quick and is all about stacked symbols.

There’s a SuperStaxx feature which is central to the game’s theme and can be played in both the base game and free spins feature – all reels have an adjacent position which are randomly replaced with 1 symbol for every spin. In terms of free spins, there’s up to 20 free spins available. You can win up to 400 times your stake but Neon Staxx is a very entertaining slot it seems and one that will surely prove popular. Enough of the writing now, see Neon Staxx in action below:

NetEnt’s next release will be Stickers which is launched in a week’s time (Thursday the 21st of May). Both Stickers and Neon Staxx will be available to play at Vera & John Casino – the instant play offering has slots from NetEnt (of course), Microgaming, IGT, WMS and NextGen Gaming amongst others.

This includes games such as Viking Vanguard by WMS, Dracula by Netent, 300 Shields and new releases such as Ariana by Microgaming and Monopoly Big Event by Barcrest. CasinoManual.co.uk readers are welcomed with £5 completely free as well as an exclusive 100% first deposit bonus up to £500 (the standard bonus is 100% up to £100). 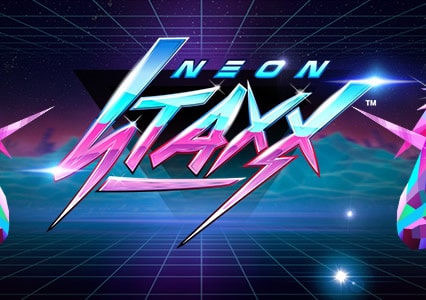