The upcoming Dork the Dragon Slayer video slot is available exclusively early at Mr Green Casino – you join a medieval knight on a quest for plenty of bonus features.

Dork the Dragon Slayer comes with 5 reels and 20 paylines from Blueprint Gaming – you can spin away from just 20p a spin on all devices. It has a medieval theme as you help Dork (the Dragon Slayer) slay the dragon. With an olde worlde feel, you will see swords, castles and jousting poles on the reels. The graphics are cartoon but look good.

There’s plenty on the bonus feature front in Dork the Dragon Slayer. When you win, the Cascading Reels feature kicks in meaning new symbols replace the winning ones to give you another chance to win. The cascades keep on coming until no more new winning combinations are formed.

There are 3 random features to benefit from in the base game – a stacked wild/wild reel is added to the reels, the dragon turns random symbol positions wild and the dragon can burn the reels to remove symbols allowing for new ones to fill the torched spaces. The latter guarantees you a win.

The best of the feature is the Dragon Slayer Free Spins feature which is played when you get 4 or more consecutive wins. Dork then battles the dragon to give you a multiplier – the free spins continue until Dork loses his health. If he successfully defeats all dragons, you’ll win 9 more free spins. Finally, a dragon multiplier of up to 5x will be applied to your winnings.

Dork the Dragon Slayer may have cartoon graphics but it’s entertaining – with a maximum win of 500 times your bet on each spin, the 5x multiplier in the feature can result in a 2,500 times your bet payout per free spin. Go to the Dork the Dragon Slayer video slot review to play for free. You can also watch Blueprint Gaming’s official trailer below:

Until it’s general release, Dork the Dragon Slayer is only available to play at Mr Green Casino. With over 2,000 video slots, you have all the newest games like Play ‘N Go’s Mission Cash, Novomatic’s Myth of Medusa Gold and Bally’s Monopoly Heights.

You’ll also get an exclusive 25 no deposit bonus spins on NetEnt’s Narcos when you sign up. On your first deposit, you’ll receive a 100% match bonus up to £100 plus up to 200 more bonus spins across various NetEnt games. 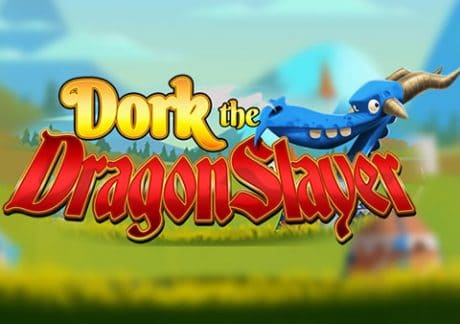