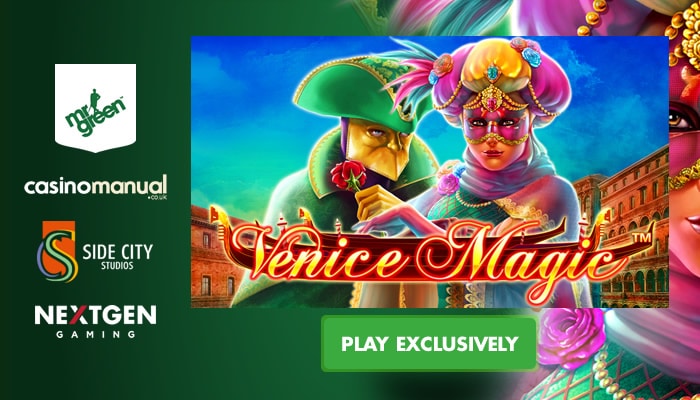 Head to 1 of the most beautiful cities in the world at Mr Green Casino with the exclusive release of Venice Magic.

The game was created by Side City Studios in co-operation with NextGen Gaming – it has 5 reels and 25 paylines and is playable on desktop, mobile and tablet devices from just 25p per spin. Look out for the wilds as there are 2 sets of special wild symbols that randomly activate in any base game spin.

Keep an eye out for the Zodiac Wheel symbol landing on the 3 middle reels as this will trigger the Zodiac Wheels feature – you spin a 3-level wheel to win up to 15 free spins, get a multiplier up to 5x and whether you will have Tower or Joker Wilds on those free spins.

The ideal scenario is getting Tower Wilds due to having 2 wild reels on each free spin – however, Joker wilds will double your wins so a 5x multiplier could become a massive 10x multiplier! With wins of over 500 times your stake to be won on each free spin, be sure to check out the Venice Magic video slot review.

Venice Magic can only be played at Mr Green Casino – it goes on general release on the 13th of September (2017). They have also just released other NextGen Gaming titles – Thai Sunrise and Platinum Pyramid. Sign up now to get 20 no deposit free spins on Gonzo’s Quest, a 100% bonus up to £100 and 200 more free spins on a selection of NetEnt games.