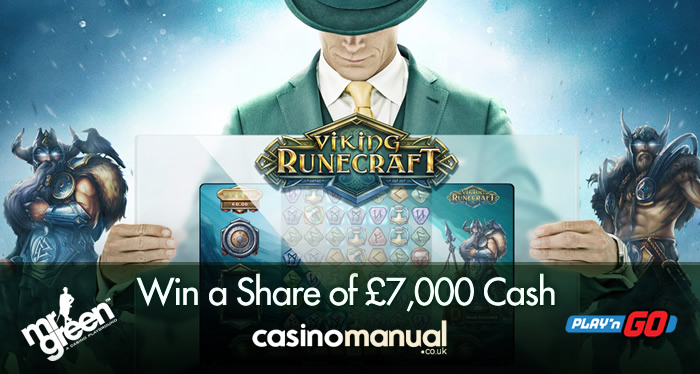 The mighty Norse gods have arrived at Mr Green Casino in Viking Runecraft, the latest video slot to be released by Play ’N Go, and they are celebrating the launch with a special £7,000 cash giveaway.

A cool £4,000 of that prize fund will be won in the Viking Runecraft Cash Battle. Get spinning on the game between now and end of play on the 4th of May (2017) and collect as many high value and feature symbols as you can. The more lucrative the symbol, the better the rewards. Similarly, the bigger the cluster of symbols in the win, the more points in the leaderboard contest you’ll win.

Finish among the top 25 finishers by next Thursday and you’ll be in line for a cash prize which ranges from a minimum £25 for the 25th placed finisher right up to £1,000 for the overall contest champion. All awards will be paid in cash so there are no pesky play through requirements to worry about!

A second chunk of £3,000 will be given away in a special Cash Drop. To be eligible to win a prize, you need to have played at least 30 rounds at stakes of 10p a spin or more between now and the 4th of May. These prizes will be awarded at random within 72 hours of the closing date. A total of 20 players will each win a cash prize of at least £25. Once again, the top prize is a cool £1,000.

Created by Play ’N Go, Viking Runecraft is an innovative Norse-themed game that’s played on an unusual 7×7 grid. It’s brimming with features too, starting with cascading reel re-spins following every successful spin. Successive wins light up the Charge of Destruction meter and with it a range of bonus extras.

You’ll notice a selection of lights under the reels – if you create a winning combination that matches the lit segments, you’ll move up a level where a different God dominates. Gifts from Thor, Odin, Freya and Heimdall can strike at random following a losing spin and deliver between 5 and 9 wilds, 4 groups of 2 high wilds, clusters of wilds until a win is achieved or a single wild on each of the 7 reels.

Collect rune stones to trigger the spin the wheel-style Valhalla bonus where even more rewards are on offer. There may be a wealth of features on offer here but Play ’N Go hasn’t skimped on the design. This looks and sounds terrific. The rune symbols are joined by an assortment of jewels, axes, helmets and hammers. Watching over proceedings is a mighty Norse god. It’s superbly designed with a stirring soundtrack that’s a nice match for the epic theme.

Norse legend has been a regular source of inspiration for slot developers. Combining high-end visuals with a raft of innovative features, the volatile Viking Runecraft is certainly one of the better ones.

Why not head to virtual Valhalla at Mr Green Casino where you could get a share of £7,000? CasinoManual.co.uk readers can start spinning with 20 no deposit free spins on NetEnt’s Gonzo’s Quest. Then there’s a double your money first deposit bonus worth up to £100. Once you deposit, you’ll be in line for 200 Starburst free spins.