She’s conquered the world of video games and now she’s after lost Egyptian treasure. We are of course talking about Lara Croft: Temples and Tombs, the latest release from Microgaming which is out now.

This treasure hunting trek is played using a 5 reel, 243 ways to win, Rolling Reels game engine. The setting is the interior of a temple building with the symbols appearing on stone blocks. There you’ll find pieces of Lara’s kit as well as Egyptian hieroglyphs and Lara herself in a variety of action poses. It all looks rather impressive.

The Rolling Reels feature means that winning symbols are removed from play when a successful spin takes place. New symbols drop in and a new payout calculation is made. Each successive symbol drop win also brings a multiplier into play. The more consecutive wins, the bigger the multipliers. They start at 1x before rising to 2x, 3x and 5x.

Multipliers are also the key to success in the Free Spins feature. It’s triggered in the usual manner by landing 3 or more scatters on the same spin. Each combination of 3 scatters awards 8 free spins meaning you could begin with 32 free spins altogether.

Once again, the Rolling Reels feature is in play. The multipliers get a big leg up during this round though. Rather than boosts of 1x, 2x, 3x or 5x, you’ll be offered multipliers of 3x, 6x, 9x or 15x. Landing scatters delivers re-triggers too. You can get up to 48 extra free spins here taking your potential total to 80.

This is a jackpot video slot so you’ll have a shot at landing bonus prizes of 15, 100 or 5,000 times your total bet courtesy of the Mini, Major and Grand Jackpots in the Jackpot feature. Look out for wilds that are collected whenever they hit – the more wilds in the meter, the better the chances of hitting a jackpot.

There’s plenty to like about this video game adaptation. The sound and visuals are top notch the features deliver more than enough excitement to keep things moving. That’s definitely the case if you like volatile action. This is a high variance game with potential wins of 7,343 times your bet on every free spin including the 15x multiplier.

Put that combination of design flair, playable features and extreme volatility together and Lara Croft: Temples and Tombs becomes well worth exploring.

Take it for a spin today at 32Red Casino – fully focused on UK players, they have recently revamped their offering to include video slots from Big Time Gaming, Net Entertainment, WMS, Barcrest, Bally and of course Microgaming. 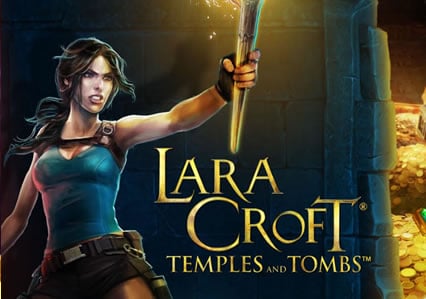