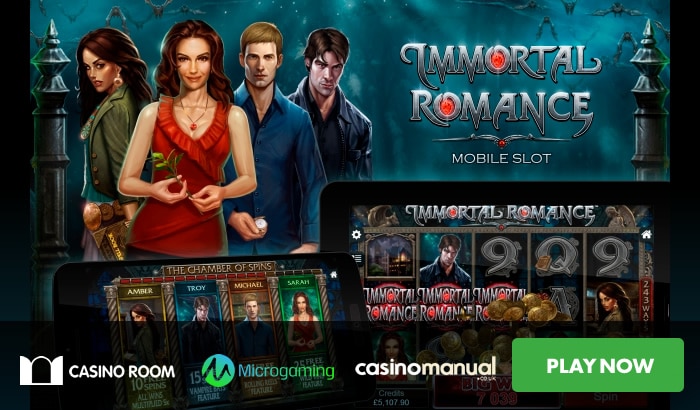 Microgaming has released a mobile/tablet version of their iconic Immortal Romance video slot – find out where to play right now.

You get to fall in love all over again with Immortal Romance as it’s finally playable on mobile and tablet devices including iOS (iPhones and iPads) and Android (amongst others). The cult favourite has 5 reels and 243 ways to win and is playable from just 30p per spin.

Originally released way back in 2011, it still is 1 of the most popular video slots around. With a vampire/fantasy horror theme, look out for the Immortal Romance logo symbol which is the wild and doubles wins when part of a winning combination.

In the base game, look out for the randomly activated Wild Desire feature where up to 5 reels can turn fully wild! However, it’s all about The Chamber of Spins feature where you have 4 free spins features based on Amber, Troy, Michael and Sarah (the game’s characters).

With wins of up to 12,150 times your stake available on each spin, this game is not for the faint hearted. For full details, check out the Immortal Romance video slot review.

You can play the mobile or tablet version of Immortal Romance at CasinoRoom – they have games from Microgaming, Net Entertainment, WMS and Barcrest. Signing up will give you 20 no deposit free spins on NetEnt’s Starburst. There’s also a 100% match bonus up to £500 plus 180 more Starburst free spins once you deposit.