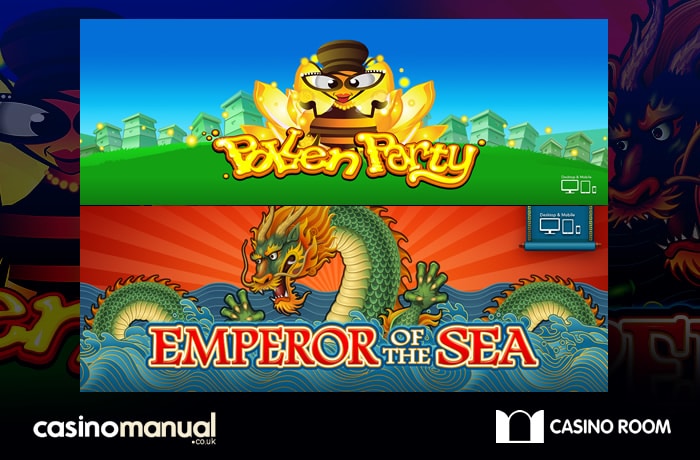 Microgaming has released 2 new video slots this month in the form of Emperor of the Sea and Pollen Party – read all about them below:

Emperor of the Sea

Emperor of the Sea is a 5 reel game with 4 rows where you get to choose from 38, 68 or 88 paylines. With a clear Asian theme, it features a Dragon Emperor and has cartoon inspired graphics. The Emperor of the Sea logo is the wild and appears stacked on all 5 reels in the base game and feature.

The Free Spins feature gives you 8 free spins and comes with Rolling Reels – when you get a winning combo, all the contributing symbols are removed and replaced by new ones giving you the chance to win various times from each free spin. Growing Wilds increases wild stacks by 1 on each free spin up to 15! Medium variance, you can win up to 1,875 times your total bet on each spin. For more details, read the Emperor of the Sea video slot review.

Pollen Party is available to play on all devices and has 5 reels and 720 ways to win. Based on honey bees, it has a distinct honeycomb reel structure and benefits from bright colours and cartoon style graphics. With 3 wild symbols, the Babee Bonus feature sees you make picks to win cash prizes.

It’s all about the Free Spins feature where you will get 12 free spins – special wilds land on the central reel to add up to 3 pollinator wilds on the reels for every free spin. With wins of up to 440 times your total bet on each spin, this game should give you plenty of entertainment. For full details, check out the Pollen Party video slot review.

Both Emperor of the Sea and Pollen Party are available to play online at CasinoRoom – they also have many other Microgaming titles like Tarzan, Immortal Romance, Thunderstruck II, Jurassic Park and Avalon II. You can also find WMS, Barcrest, Bally and Net Entertainment games too.