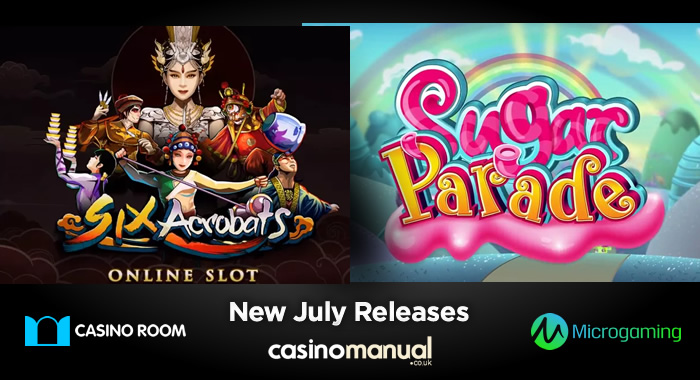 Microgaming have just released 2 new video slots – read all about Six Acrobats and Sugar Parade as well as finding out where best to play.

You can always expect new games from Microgaming this month and you can head to a circus and a candy-filled world with Six Acrobats and Sugar Parade (respectively) – here’s a summary of what to expect:

Six Acrobats comes with 5 reels and 9 paylines – it can be played from just 9p per spin on desktop, mobile and tablet devices. Focused on a group of travelling acrobats (6 of course!), the wild symbol is important as you will benefit from a 5x multiplier when it forms part of a win.

There’s also a Free Spins feature where there’s up to 25 free spins up for grabs initially – you can add to your tally, 1 at a time, with every scatter that appears on the reels. Furthermore, you’ll also get a 5x multiplier on all winning combos – if the wild is part of the win, your win will be subject to a whopping 25x multiplier.

With potential payouts of up to 4,333 times your bet on every free spin, be sure to check out the Six Acrobats video slot review. You can also watch the game in action with Microgaming’s trailer:

Sugar Parade has 5 reels and 15 paylines and can be played on all devices from 15p per spin. This game takes you on a journey to a candy-filled world which has a fantasy feel about it. There’s a Sugar Parade’s Royal Bonus feature where you simply make picks to win cash bonuses.

As you’d expect, there’s a Free Spins feature where you can win up to 20 free spins with a 3x multiplier. Simple and sweet, you can win up to 1,658 times your stake on every free spin. For more details, read the Sugar Parade video slot review – you can also see the official YouTube preview video below:

You can play Six Acrobats & Sugar Parade at CasinoRoom – they offer you games from Microgaming, Net Entertainment, WMS, Barcrest and Bally. As a UK player, you are welcomed with 20 no deposit free spins on Starburst. Then there’s a 100% first deposit up to £500 – make a deposit and you will also get 180 more Starburst free spins.