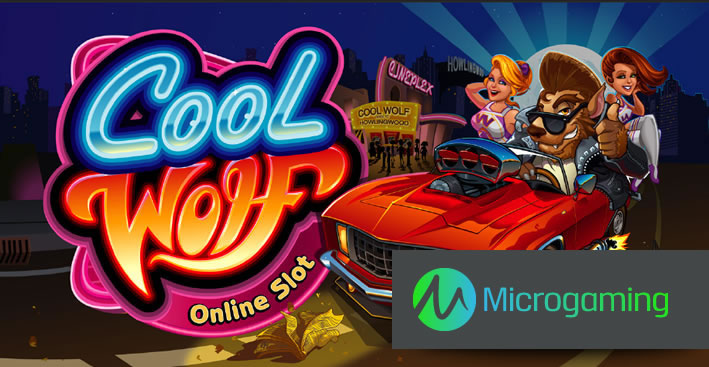 Microgaming’s latest video slots have been launched today – read about Football Star and Cool Wolf below including the official video previews.

Cool Wolf is a 5 reel slot game with 243 ways to win. It’s based on an all-American teen hero which can be played from just 50p a spin. Look out for the Howling Wild Bonus feature in the base game as 1 of the middle reels (reels 2, 3 or 4) can turn completely wild. Consecutive winning spins will increase the multiplier up to 10x as Cool Wolf using Rolling Reels technology.

This game is all about the Free Spins feature where you can start with up to 25 free spins. You will benefit from the Rolling Reels feature where consecutive winning spins increase the multiplier up to a massive 10x! It’s a medium variance game and is sure to become a howling hit. Watch Microgaming’s video teaser below:

The other slot to be released today is Football Star – the game has obviously been released with the 2014 World Cup starting on the 12th of June. Again, the game has 5 reels and 243 ways to win. It’s very similar to Cool Wolf in respect that there’s Free Spins feature with up to 25 free spins on offer with Rolling Reels. This means you can get up to a 10x multiplier for consecutive winning spins.

Instead of the Howling Wild Bonus feature in Cool Wolf, you have the Striking Wild feature in Football Star –they are identical as both features randomly change 1 reel completely wild. It depends on which theme you like but despite being a footie fan, Cool Wolf is nicer and more fun. Anyway, here’s the video teaser for Football Star:

Both new Microgaming slots can played at Roxy Palace Casino – they welcome new UK players with a £10 no deposit bonus which is available for a limited time only. All you need to do is register an account and then add a valid UK debit/credit card (by clicking on the bank button once you have logged in) – this is to ensure you’re over legal age. The £10 no deposit bonus will be added to your account within 15 minutes to play with!

There’s also a 100% first deposit bonus up to £150 to take advantage of. Roxy Palace offers you both a download and instant play casino using Microgaming software. This means you can play slots like Avalon II, Thunderstruck II and the impressive Immortal Romance.