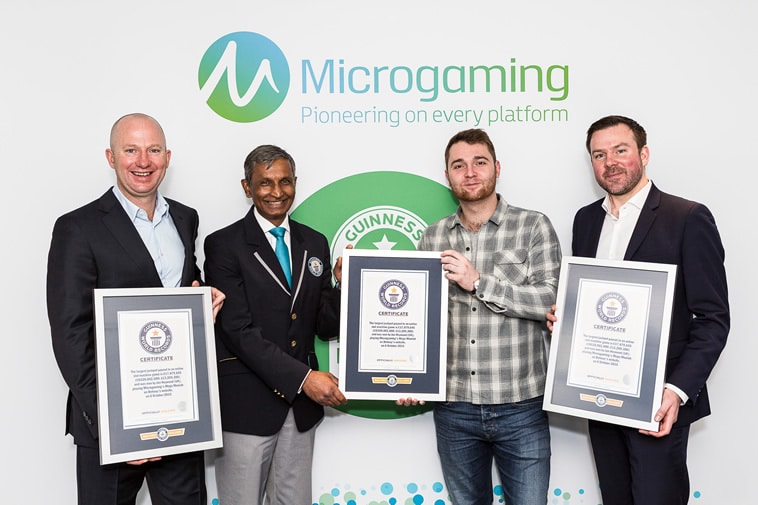 Lucky Jon Heywood from Cheshire pocketed the record-breaking jackpot playing the Mega Moolah slot on the 6th of October (2015). Heywood was on hand at the International Casino Exhibition (ICE) in London to collect his award from the Guinness Book of Records.

“It’s been a few months since the win, but I still can’t quite believe I won such a life-changing amount!,” said Heywood. “And to officially become a GUINNESS WORLD RECORDS title holder is the icing on the cake. With my winnings I’ve enjoyed some nice holidays, bought a new car, ensured my family are looked after and invested wisely for the future. It’s been incredible.”

Heywood deposited just £30 on the famous night and was playing at stakes of only 25p per spin when he hit his amazing win. In the space of 7 minutes, he’d won more than 52 million times his bet and any financial worries were over for the rest of his life.

“It was fantastic to welcome Jon to our stand at ICE for the official GUINNESS WORLD RECORDS certificate handover,” said Roger Raatgever, CEO of Microgaming. “Having spent some time with him today, I can honestly say it couldn’t have happened to a nicer guy. We’re proud to share the world record and look forward to creating our next jackpot millionaire.”

If you fancy trying to follow in Jon’s amazing footsteps, why not give The Dark Knight a spin. It’s a 5 reel, 243 ways to win slot which is based on the 2008 Hollywood blockbuster film. Graphically brilliant, it features Cinematic Spins and a free spins feature where you will begin with 15 free spins and a 2x multiplier.

It gets better at Batman or The Joker can appear in the feature to increase the multiplier up to 5x! It also offers you 4 randomly triggered progressive jackpots: Mini, Minor, Major and Mega. The latter is what you’re looking for as the progressive jackpot stands at a whopping £5.6 million and rising!

There are many places to play The Dark Knight but I recommend BetVictor Slots who have slots from Net Entertainment, IGT, Microgaming, Quickspin, Novomatic, Aristocrat, NextGen Gaming and Play ‘N Go (amongst many others).

CasinoManual.co.uk readers are welcomed with an exclusive 15 no deposit free spins which can be used on a wide variety of NetEnt slots including Dead or Alive, Gonzo’s Quest, Piggy Riches, Jack and the Beanstalk, Blood Suckers and the brand new Guns N’ Roses.

There is also an exclusive 100% match bonus up to £200 (the standard involves wagering to get up to £175 free) – remember to enter the code WELCOME200 in the promo tab before you deposit.