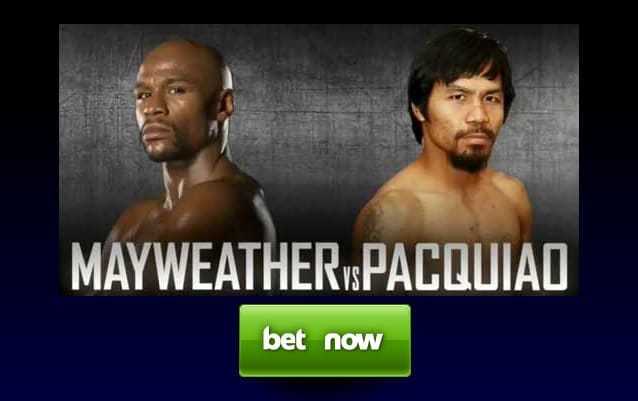 Tonight sees Floyd Mayweather take on Manny Pacquiao in what’s being described as the biggest fight in boxing history – find out where to bet on the fight.

Last night saw the 2 boxers weigh in with 11,500 fans watching ahead of the most lucrative fight in the history of the sport. It took place at the MGM Grand Garden Arena in Las Vegas, Nevada. Tickets were being sold to the weigh in for up to $800! It’s predicted that the fight will generate over $400 million (approximately £265 million).

The fight will see the boxers fight for the WBC, WBA and WBO welterweight titles. According to sources at MGM Resorts, more than 3 quarters of all bets have been for Pacquiao with a $500,000 bet being place on the Philippine.

I recommend you place a bet at Coral where new customers can choose a special offer. They are offering 5 to 1 on Mayweather to win and 10 to 1 for Pacquiao to win. All you need to do is bet £5 on either box to win to get the odds highlighted. If you lose, you will get £20 of free bets!

Manny Pacquiao is the more experienced box who has won 57 times from 64 professional fights. Lloyd Mayweather has fought 47 times and won them all. However, Mayweather is 5ft 8ins with Pacquiao being 5ft 6 1/2ins which gives the American a 5 inch advantage. Saying that, Pacquiao has 38 knockouts to his name whilst Mayweather has 26 knockouts.

It promises to be a great fight with the event being cited as the biggest fight in boxing history. Even though it takes place at 4am on Sunday morning, many boxing fans will be tuning in to watch this pay-per-view fight to see who is the best pound for pound boxer in the world.

If you like playing slots, Coral offers you a Playtech-powered casino with slots such as the Marvel titles with The Avengers, Iron Man 3 and The Incredible Hulk being the best ones. They also have branded titles like The Sopranos, The Mummy and Gladiator Jackpot.

Bet on the Mayweather v Pacquiao Boxing Fight at Coral