January 2020 Lots of Video Slots Being Added to CasinoManual.co.uk 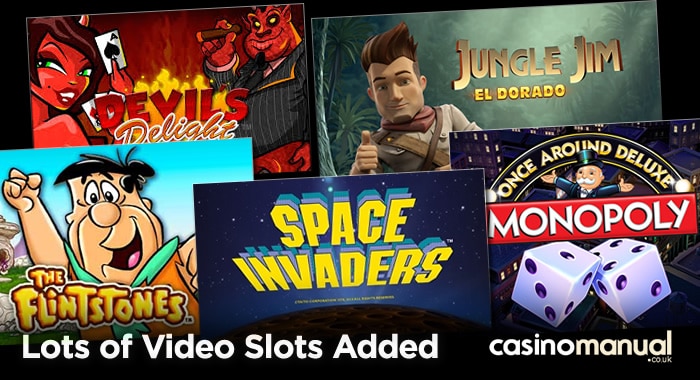 At CasinoManual.co.uk, we have a very extensive Play Slots section – we are adding to this with over 130 games being added.

We are bringing you video slots from all the major providers as well as the best titles from the lesser known/up and coming developers too. So far, we’ve added lots of new slots which have been released in the last few weeks – this includes Microgaming’s Jungle Jim El Dorado, Playtech’s The Flintstones and Net Entertainment’s Secrets of Atlantis.

When it comes to WMS Gaming, plenty of games can now be found including classics like Jungle Wild, Wizard of Oz Wicked Riches and Amazon Queen. Net Entertainment has been given a boost with Devil’s Delight, Viking’s Treasure and the underrated Secret Code. As for Microgaming, you have the superb Electric Diva, the volatile Leagues of Fortune and the classic Avalon. Playtech wise – I recommend Gem Queen, Cat Queen and Jade Emperor.

With about 70 video slots added in recent times, there’s still a lot more to come – we have more Playtech games, IGT ones, a large range of Novomatic titles and selected slots from Yggdrasil Gaming, Play ‘N Go and NextGen Gaming. For more details, visit the Play Slots section for all our video slots.

1 video slot I would recommend is the brand new Space Invaders from Playtech – based on the iconic arcade game, it has 5 reels and 10 paylines and can be played on all devices from 10p a spin. You have the Invaders Turn Wild feature where the cannon removes low value symbols and transforms them into wilds (with double wins. There’s a UFO Wild feature where up to 9 wilds are added to the reels!

You can play Space Invaders at NetBet Vegas who are offering a guaranteed cash prize up to £1,000 when you place the game. They also welcome CasinoManual.co.uk readers with 20 no deposit free spins on Age of the Gods and a 100% first deposit bonus up to £500 – enter the code SLOTGOD in the Cashier before depositing to qualify.