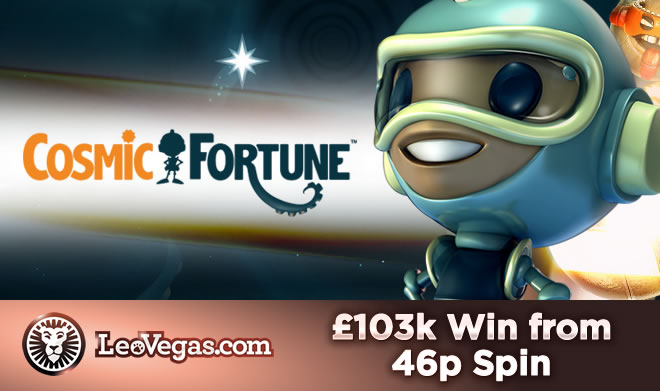 A lucky LeoVegas Casino customer has won over £103,000 from a 46p spin playing Net Entertainment’s Cosmic Fortune video slot – find out more below.

The customer is a lady called Ann-Kristin Ahlin from Sandviken which is a small town north of the nation’s capital, Stockholm. She was playing the Net Entertainment-powered Cosmic Fortune slot game when she won over £103,000 from a 46p spin.

She was in her home, in her living room, when she started playing NetEnt’s Cosmic Fortune. She entered 2 bonus features, benefitted from avalanches and free spins. Then she went on to follow the path led by marbles when she came across the 3 progressive jackpots.

“I’ve played a bit in my life but I can’t describe how much this amount of money means to me. I will pay for my partner and his daughter to go to America, we’ve always talked about it.”

“After working late that night my partner and I went to a bar and celebrated with an Irish coffee, it was, it was very cosy and I was having trouble believing it. When I first told him of the win he yelled and asked me if I was a millionaire.”

“Ahlin’s win goes to show that anyone can win big at LeoVegas, even if they’re just betting 46p. We hope she and her family have a fantastic time in America and it’s a great feeling for everyone here to know that playing at LeoVegas helped her get there. Maybe when she gets there she can celebrate with something stronger than an Irish coffee.”

LeoVegas Casino is a great place to play slots and progressive jackpot slots too – you have games from Net Entertainment, IGT, Play ‘N Go, WMS Gaming, Barcrest, Microgaming and NextGen Gaming amongst others. Some new releases they have like WMS’ Rainforest Dream and Play ‘N Go’s Wild North. You also have Microgaming’s The Dark Knight which has a jackpot worth over £12 million (the highest it’s ever been).

Become the Next Big Winner at LeoVegas Casino