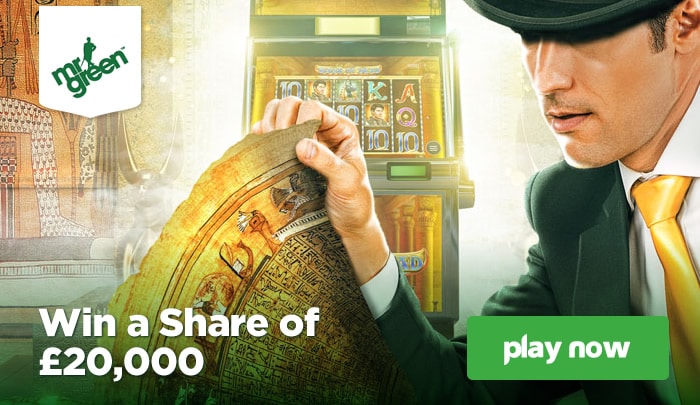 Awaken your inner Indiana Jones and go on a quest for a share of £20,000 in a great new giveaway from Mr Green Casino based on the Egyptian-themed Rich Wilde and the Book of Dead video slot.

50 lucky players are in line for cash prize of at least £50 with the first name out of the virtual hat set to scoop a fantastic £5,000. The full list of prizes is as follows:

To be in with a chance of winning 1 of those prizes, simply get spinning on the Rich Wilde and the Book of Dead video slot on either desktop or mobile. For every series of 20 spins played at stakes of at least 10p per spin, you’ll be given a ticket into the £20,000 Cash Drop prize draw.

You have from noon today, the 28th of June (2016), until just before 11pm on the 7th of July to earn your entries. The draw follows a day later which is also when the prizes will be credited to accounts.

Powered by Play ‘N Go, Rich Wilde and the Book of Dead is a highly volatile, 5 reel, 10 payline archaeological adventure that comes with a free spins feature where extra expanding symbols can boost your winning chances.

The likeliest way to secure the pyramid’s hidden treasure comes via that Free Spins feature. Before the free games begin, 1 randomly chosen standard symbol will gain some magical expanding properties. After each spin, the expanding symbol will fill the whole reel and a new payout will then be made with the special symbol in position.

You can expect spells as dry as the desert when playing Book of Dead. Get lucky with the free spins though and it can deliver mighty rivers of riches. For full details and to play for free, read the Rich Wilde and the Book of Dead video slot review.

Why not give it a spin at Mr Green Casino? New players at the site can help themselves to an exclusive 20 no deposit free spins on NetEnt’s Jimi Hendrix. There’s also a 100% welcome bonus worth up to £100 as well as 100 Bonus Spins on the Mr Green Moonlight slot.