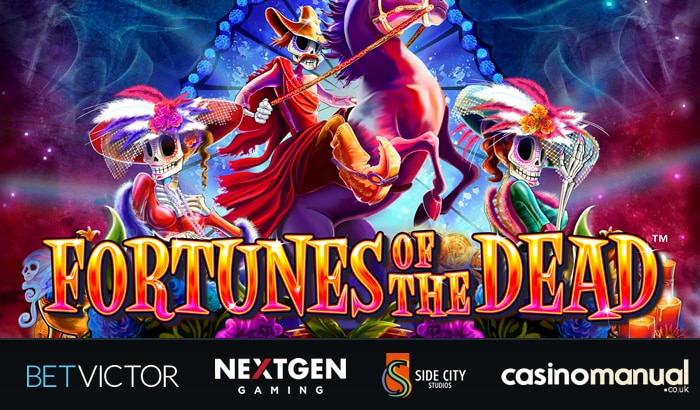 The Mexican Day of the Dead celebrations are almost upon us and BetVictor Casino is marking the famous fiesta with the launch of the Fortunes of the Dead video slot.

Created by NextGen Gaming in association with Side City Studios, it’s a 5 reel, 50 payline game that comes with garish visuals and plenty of extras. There are a trio of bonus features on offer in this Mexican party.

In the randomly triggered Once In A Wild Bonus feature, you’ll receive a single re-spin, complete with 4 guaranteed extra added wilds. The second extra, the Skull Bonus feature is a variation on the pick me round – after landing the skull symbols on reels 1, 3 and 5, you get to choose 1 of them and in the process, win an instant cash prize.

The final bonus is the Free Games feature – this one is triggered by landing the scatter on the middle 3 reels on the same spin. You’ll then get 5 free spins. On each of them, 1 sticky wild is added. On the 5th free spin, you’ll have 5 sticky wilds in play which can really boost your winning chances.

As anyone who has seen the James Bond film Spectre knows, the Day of the Day festival is a bold and colourful affair. That’s certainly the case with the Fortunes of the Dead video slot. Subtle it ain’t. Expect sensory overload as you see dripping candles, skulls, bowls of fruit and cauldrons full of spirits spinning round the reels. The most rewarding standard symbols are the 3 skeleton characters.