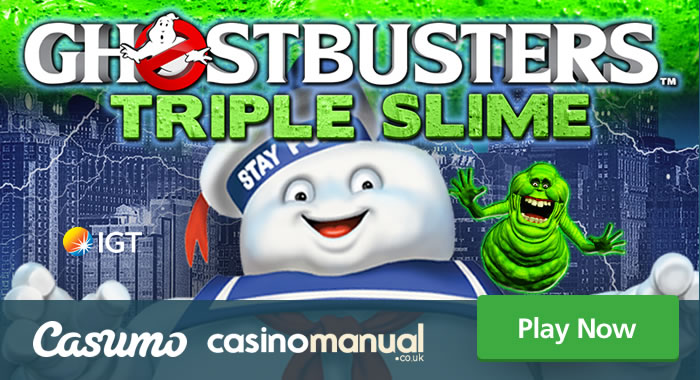 As Ray Parker Jr famously sang, “If there’s something strange, in the neighbourhood. Who ya gonna call? Ghostbusters”. You can now join paranormal professors Spengler, Stanz and Venkman in Ghostbusters Triple Slime which is available to play now at Casumo Casino.

Powered by IGT, this video slot is based on the classic 1984 movie and is played using a 5 reel, 720 ways to win game engine where successful combinations are created by landing matching symbols on adjacent reels.

Those reels include a selection of ghostbusting equipment including ray guns and ectoplasm detectors as well as the world famous Hearse. Top of the bill are the trio of Ghostbusters – Spengler (Harold Ramis), Stanz (Dan Aykroyd) and Venkman (Bill Murray). Land 5 Venkmans for a 1,000-coin payout. The most rewarding symbol is the Ghostbusters logo which offers awards of 10,000 coins if you land a 5 in a row combo.

Look out for the Stay Puft Marshmallow man which is the game’s wild – it can land on the middle 3 reels only and substitutes for everything bar the scatter and bonus symbols.

Ghostbusters Triple Slime comes with a pair of bonus features. Land 3 of the wobbly green ghost anywhere on the reels to trigger the Slimer Scatter Bonus feature – each scatter turns into a bonus wheel which will spin to award a cash prize of anything up to 2,000 coins.

Land 3 or more Bonus symbols and you’ll activate the Triple Slime Bonus feature – this is another spin the wheel feature. First pick a ghost to reveal how many pointers you’ll get on each of the 3 reels. These can offer cash awards of up to 5,000 coins as well as multipliers that can boost payouts by up to 10x.

The design here is done comic book style and works pretty well, especially with the classic Theme From Ghostbusters blasting away in the background. Expect to land the features at regular intervals ad hopefully blast your way to a supernatural stack of coins. For more details, check out the Ghostbusters Triple Slime video slot review.

New players can take Ghostbusters Triple Slime for a spin at Casumo with a bonus on your first 5 deposits worth up to £1,200 as well 20 free spins every day for your first 10 days at the site. They have lots of video slots to choose from including new releases such as Play ‘N Go’s Viking Runecraft, NextGen Gaming’s Theatre of Night and WMS’ Spartacus Call to Arms.