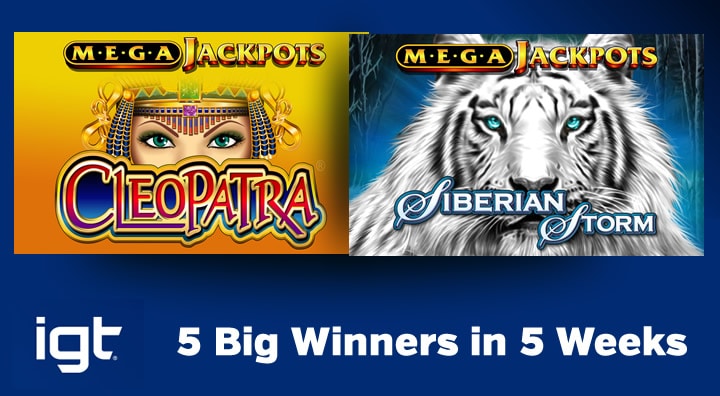 IGT has announced that 5 progressive jackpots have been won in 5 weeks totalling more than £3.6 million – find out more below.

There have been 5 big winners in the last 5 weeks – progressive jackpots worth over £3.6 million have been won at online casinos including Mr Green and Ladbrokes. Here are the details:

IGT launched both MegaJackpots Siberian Storm and MegaJackpots Cleopatra simultaneously on desktop, mobile and tablet devices in February this year. In total in 2015, these slot games have distributed more than £9.3 million in jackpot cash!

For more details, read reviews of the non-jackpot versions which are identical really – Cleopatra is a classic and regarded as the most popular slot of all time whilst Siberian Storm is one of the most played online slots with MultiWayXtra technology.

The biggest progressive jackpot right now (at time of writing) is available via Microgaming’s The Dark Knight – the jackpot currently stands at a life-changing £3.8 million and counting! You can play The Dark Knight, and the IGT MegaJackpots titles, at Mr Green Casino which has produced 2 winners listed above.

CasinoManual.co.uk readers are also welcomed with an exclusive 100% first deposit bonus up to £200 – the standard offer is 100% up to £100 so you can get an extra £100 free if you want it. Once you deposit, you will receive 100 free spins on NetEnt’s Spiñata Grande.