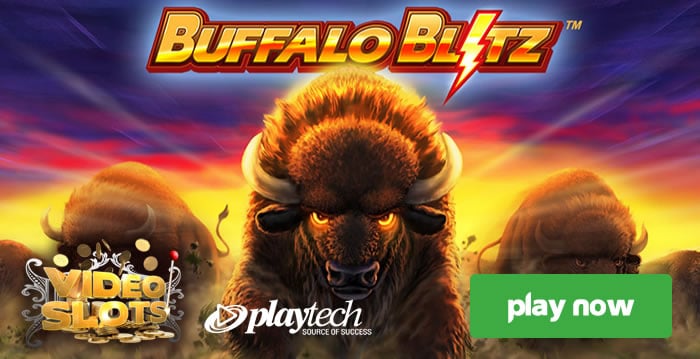 Video Slots Casino has just added the high variance Buffalo Blitz video slot – read all about it, watch the official YouTube trailer and find out what other games you can play.

Buffalo Blitz is powered by Playtech and has 6 reels and an amazing 4,096 ways to win. Playtech’s answer to WMS Gaming’s Raging Rhino, it can be played from only 40p a spin across desktop, mobile and tablet devices including Androids, iPads, iPhones and laptops (amongst many others).

Set amongst grasslands in North America, this buffalo themed offering is highly volatile so has potential to pay out very big amounts. With a very grand feel to it, you will come across lynxes, bears, moose and skunks on the reels. The Buffalo is the main symbol and appears stacked on all 6 reels. The other symbol to look out for is the diamond wild which appears on reels 2 through 6.

Buffalo Blitz focuses on the Free Games feature where you will get between 8 and 100 free spins initially – there is the chance to re-trigger the feature to give you unlimited free spins. However, the big wins come from the wild diamond symbol as they apply a random multiplier up to 5x when part of a winning combination!

As mention, Buffalo Blitz is extremely high variance so it will more than likely bleed your bankroll dry – as the old saying goes ‘when it rains, it pours’ meaning it can reward you with massive wins. To check it out, look at the Buffalo Blitz video slot review – you can also see how the game plays out by watching Playtech’s official YouTube video trailer below:

Video Slots Casino currently has 1,690 games in total (at time of writing) with the vast majority being video slots – you have games from all the popular software providers like Net Entertainment, Microgaming, IGT, NextGen Gaming, Play ‘N Go, WMS Gaming, Barcrest – the list goes on and on and on! Some of the new additions include Thunderkick’s Babushkas, NetEnt’s Secrets of Atlantis and NextGen Gaming’s Emerald Isle.

Want to play? Sign up now to get 11 no deposit free spins on NetEnt’s Starburst – then there’s a 100% first deposit bonus up to £200. That’s not all though as you can benefit from 25% cashback on all spins as well as £40,000 of weekly casino races. If you play regularly, you’ll also appreciate 12-24 hour cashouts including weekends.