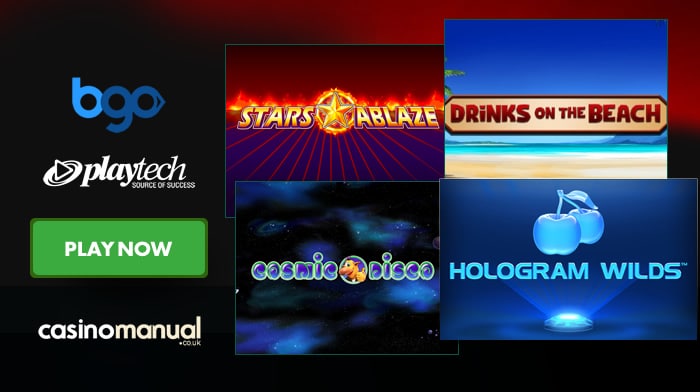 Fancy playing the newest video slots from Playtech? Head over to bgo Casino where you can play Holograms Wilds, Cosmic Disco, Stars Ablaze and Drinks On The Beach.

Sick of the weather?

Head to a tropical beach in Drinks On The Beach from just 20p a spin in this 5 reel, 20 payline offering. Look out for the wild as part of a winning combo as you will play the Respins feature where wins in the respin are doubled. You can also win more respins with the multiplier rising up to 10x.

You can also benefit from a Giant Wild Drinks feature as a giant 2 reel wild appears on reels 4 and 5 – this triggers the Respins feature with consecutive wins increasing the multiplier up to 10x. Highly volatile, there’s a whopping 10,000 times your bet to be won on each spin.

Look no further than Stars Ablaze which is a simple 5 reel, 5 payline game which is playable from as little as 5p per spin. The star symbol is the most valuable giving you 1,500 times your total bet for 5 on a payline but the main attraction in the Blazing Bonus feature where you make picks to win cash prizes.

That’s the theme in the 5 reel, 25 payline Cosmic Disco where you can spin the reels from just 25p a spin. It’s all about the Free Games feature where you will benefit from sticky wild symbols on the 3 middle reels for the first set of 8 free spins. With these wilds still locked in place, you can get additional wilds on the last reel for the remaining 8 free spins.

Shall the best be saved for last?

Well, that’s the case in Hologram Wilds which has 5 reels and 40 paylines. Playable from 40p per spin, this sci-fi inspired title comes with stacked wild symbols. It also has a Free Games feature where you will receive infinite free spins with lots more stacked wilds. Playtech’s answer to Starburst but better!

bgo Casino is always the first online casino to add new Playtech titles – they also boast other software providers like IGT, WMS, Net Entertainment, NextGen Gaming, Quickspin, Barcrest and many others. When you register, you will get 20 Starburst free spins – with no deposit needed.

Get started at bgo Casino