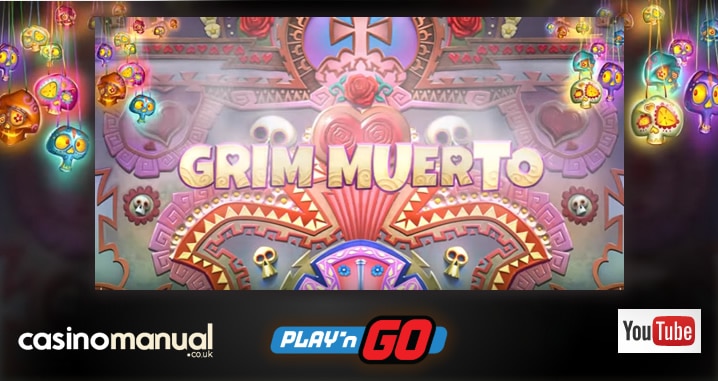 Play ‘N Go will be releasing the Grim Muerto video slot in a couple of days – find out what it will entail and watch a YouTube trailer video here at CasinoManual.co.uk.

The much anticipated Grim Muerto will be live on Tuesday the 12th of July (2016) – the video slot will have 5 reels and 20 paylines and will be playable from 20p per spin across compatible HTML5 devices such as Android, iPad and iPhone (as well as laptops and PCs).

Grim Muerto is a colourful title with a Mexican flavour that celebrates the popular Day of the Dead holiday (Día de Muertos). With a mariachi soundtrack, it features 4 mariachi band members and has plenty to offer feature wise.

If you get the vihuela (Mexican guitar) on the highlighted reel marked by El Marco Siniestro, the symbol (which is a wild), will take over the entire reel! The Book of Dead is the scatter with 3 of them giving you access to the Free Spins feature.

Here you will receive 10 free spins as well as benefit from an extra wild symbol. El Marco Siniestro can highlight extra reels to give you more wild reels. With more free spins to be won, you can also trigger the feature by getting only 2 scatters – you then pick 1 of the mariachi band members to play the feature or win a cash prize.

Grim Muerto will be a medium variance game with wins of up to 2,500 times your stake on offer – to see how it will look, watch Play ‘N Go’s official YouTube preview video below:

Here at CasinoManual.co.uk, we’ve added a few Play ‘N Go video slots recently with Golden Caravan, Sails of Gold and Rich Wilde and the Book of Dead. These games were mobile/tablet only and were adapted to be played on desktop devices. My pick is the latter which is an ancient Egyptian themed game which is highly volatile and benefits from a special expanding symbol in the Free Spins feature.

Play ‘N Go video slots can be found at many online casinos found here at CasinoManual.co.uk – I recommend Mr Smith Casino who have an exclusive offer for you. Sign up and benefit from a generous 200% first deposit bonus up to £200 – deposit just £100 to receive £200 free. Once you deposit, you will also get 50 free spins on NetEnt’s Starburst.

Get your exclusive offer at Mr Smith Casino