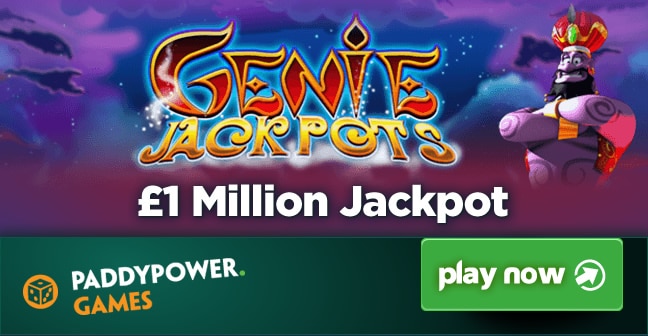 The Genie Jackpots progressive jackpot and now is over £1 million and counting – the game is available to play at Paddy Power Games.

Paddy Power Games has paid out over £4 million cash across their progressive jackpot titles with the amount to cross £5 million shortly. Just last Sunday DW from Falkirk won £192k playing the Cat in Vegas jackpot. Now it’s the turn of Genie Jackpots.

Powered by Blueprint Gaming, this Arabian genie themed slot has a jackpot worth over £1 million. With 5 reels and 20 paylines, this colourful and fast-paced game with cartoon graphics can pay you a life-changing amount. It’s playable from just 20p a spin to as much as £500 a spin.

However, it’s all about the 3 Wishes Power Spins where you can benefit from genie wilds with a respin, genie wilds with wins doubled, golden monkey wilds which turn other symbols wild and the progressive jackpot. For more details and to play for free, read the Genie Jackpots slot review.

Paddy Power Games is an instant play casino with slots from various software providers – you have games from Barcrest, Net Entertainment, Blueprint Gaming, IGT and NextGen Gaming amongst others with titles like Rainbow Riches, Zuma, Starburst and Cleopatra on offer.

You can also head over to Paddy Power Casino which offers you a fully-powered Playtech offering. You have all the Marvel slots like The Avengers, The Incredible Hulk and Iron Man 3 as well as superb games like White King, Sultan’s Gold, Desert Treasure II and Gladiator Jackpot.