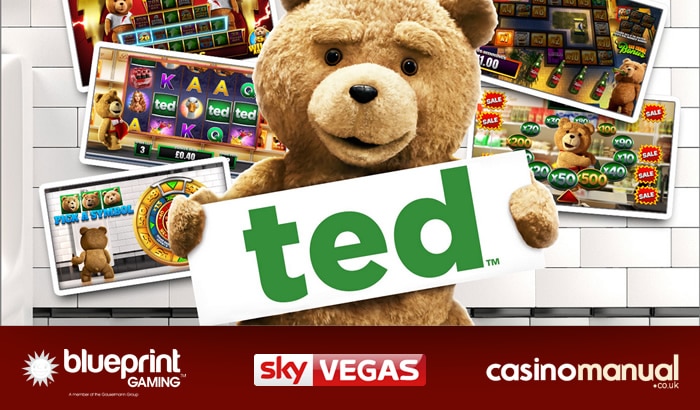 Have you seen the Ted movies? Blueprint Gaming has developed a video slot based on the foul-mouthed bear and it comes with lots of bonus features.

The Ted video slot by Blueprint Gaming is based on the 2012 comedy film which was Seth MacFarlane’s first feature movie. A cut favourite, Ted is a teddy bear that comes to life and has a filthy mouth – this features in the game and encompasses 11 bonus features in total.

With 5 reels and 20 paylines, you can play Ted on all devices from as little as 20p per spin. The setting is Ted’s living room as he sleeps on a sofa which is covered in empty beer cans. If Ted awakes from his sleep, he will trigger 1 of a number of bonus features.

He uses a laser gun to fire wild symbols onto the reels, blows smoke his hookah pipe to add extra Ted symbols which change into the same matching symbol or add a giant 3×3 symbol. If he grabs the TV remote, you will get re-spins with winning symbols added to the current cluster. He can also use the bong to add Bonus symbols which makes it easier to play 1 of the 5 main bonus offerings.

As all of this is going on, Ted eggs you on despite swearing quite often. I loved the films and really like the video slot due to the wide range of bonus features on offer. With big wins available throughout, make sure you read the Ted video slot review for full details and to play for free.

Ted can be played at Sky Vegas Casino – UK focused, they have lots of quality games from top software providers like Novomatic, WMS, IGT and NetEnt. With extremely fast cashouts, new players will receive £10 no free as a deposit £10, get £40 free deposit bonus.