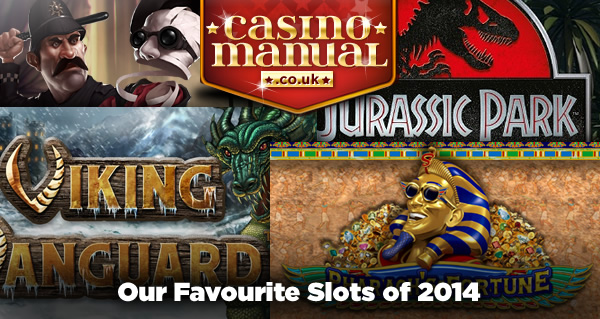 There have been many great slot games released in 2014 and below you can find our favourites including titles from WMS Gaming, Net Entertainment, Microgaming and IGT.

First of all, I think the slot provider of the year (2014 that is) has to go to WMS Gaming. They have really stepped up their game (no pun intended) with lots of new releases. They have launched new titles every single month and acquired both Barcrest and Bally.

In terms of slots, you can’t go wrong with Viking Vanguard – the Norse themed slot is the first WMS game to use the volatile 6×4 game engine. Playable from just 30p a spin, it’s based on a dragon which you need to help defeat to win big. It features wild stacks in the base game as well as in the Free Spins feature where you can get up to 100 free spins initially. Every single free spin has up to 5 reels that can change into wild stacks to give you huge wins.

Net Entertainment released The Invisible Man just before Christmas as it based on the classic 1933 film which derived from a H.G Wells science fiction novel. Playable from 20p a spin, they are 4 bonus features which free spins, re-spins and walking wilds. Police wilds moves horizontally to the right and gives you re-spins whilst Griffin wilds move horizontally to the left and gives you re-spins.

When they appear in the same reel, they merge to trigger the Free Spins feature where you get 10 free spins. If you fill either meter above the reels, you will trigger other bonus features. The Griffin’s Rage Bonus feature takes you to 3 locations where you pick to win cash prizes. The Police Spins Bonus feature gives you 3 spins with up to 5 burning wilds on every single spin!

Microgaming have also released regular slots but have launched several branded titles like Game of Thrones, Terminator 2 and Jurassic Park. The latter is the best and is based on Steven Spielberg’s 1993 iconic film. Playable from 30p a spin, it has footage from the actual movie and benefits from superb graphics and animations.

You have the T-Rex Alert Mode feature in the base game where up to 35 wilds are added to the reels with 6 spins awarded. Then there’s a Free Spins feature where you have 5 individual features based on varying dinosaurs. My favourite is the T-Rex Free Spins feature as you get wild reels when T-Rex appears.

IGT revamped the brilliant Pharaoh’s Fortune slot with better graphics and animations. Now available to play on your mobile or tablet device, it now has 15 paylines and still uses the Walk Like An Egyptian song from The Bangles.

Playable from 15p a spin, this game is all about the Pharaoh’s Fortune Bonus feature where you turn over stone blocks to get more free spins or increase the multiplier. You can get up to 25 free spins with a 6x multiplier initially but there’s up to 999 free spins with re-triggers – this is a must if you love your slots.