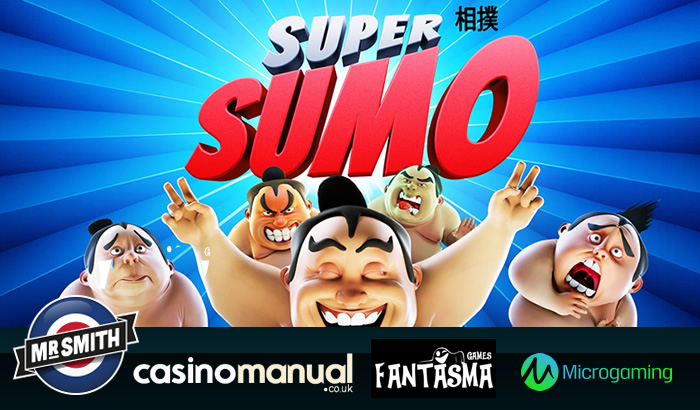 Martial arts lovers with an ample girth can now head to the ring at Mr Smith Casino which has just launched the anarchic Super Sumo video slot.

Created by Fantasma Games and played on the Microgaming platform, it’s a 5 reel, 25 payline video slot that’s based on the famous Japanese form of wrestling. Boasting madcap design, the stars of this particular show are the quartet of wrestlers.

They don’t appear to be in the best of moods though as each 1 of them boasts an outlandish facial expression. You’ll see the sad wrestler, the disgusted wrestler and the fearful wrestler. Best of the bunch is the angry wrestler who’ll get you a 200 coin reward if you land 5 on a payline.

Far more cheerful is the smiling sumo who can land on all 5 reels and substitute for all other symbols with the exception of the scatter – the wild offers awards of up to 500 coins. The theme here may be anarchic here but Super Sumo comes with a pair of serious feature rounds.

Hitting more regularly of the 2 is the Happy Wilds Sticky Respin feature – this is triggered every time you land 2 or more wilds on the same spin. A re-spin is awarded with the wilds from the triggering spin locking in place. The re-spins keep on coming as a long as a new wild is added. Some serious rewards are on offer here.
Super Sumo also comes with a Free Spins feature – here you can look forward to 10 free spins. Helping things along are the stacked wilds that are in play during this feature. Basically, you will benefit from 1 wild reel on every single free spin.

Readers of a certain age may remember a ridiculous Japanese TV gameshow called Endurance. The design in Super Sumo reminded us of that with the wobbling bellies of the animated wrestlers and the Asian style soundtrack.

If you fancy some slapstick sumo action, then this extremely silly but highly entertaining video slot ticks all the right boxes. For full details, read the Super Sumo video slot review – you can also watch the official YouTube trailer below to see the features in action:

New players can take Super Sumo and hundreds of great games for a spin at Mr Smith Casino – you have all the latest titles including ELK Studios’ Ivanhoe, Microgaming’s Beautiful Bones, Yggdrasil Gaming’s Legend of the Golden Monkey and Play ‘N Go’s Multifruit 81.

CasinoManual.co.uk readers are also entitled to a great welcome package. Make a deposit and Mr Smith will give you an exclusive 200% bonus – this means you will get £200 free when you deposit £100. On top of this, you will receive 50 free spins to use on NetEnt’s Starburst.