Chance Interactive’s circus strongman, which was produced alongside NextGen Gaming, is back for an encore performance in Buster Hammer Carnival which has just launched exclusively at LeoVegas Casino.

We were big fans of the first outing for Buster Hammer so had high hopes for the sequel. Thankfully, we weren’t disappointed. This 5 reel, 3,125 ways to win video slot comes with the same blend of classy design and innovative extras that made the original such a playable game.

The action takes place within a circus big top. On the reels are circus-style letters plus tickets, hot dogs and an archery target. Top of the bill as far as payouts go is Buster himself who’ll get you 7.5 times your bet for a 5-symbol combination. Buster’s hammer is the wild. This can hit on reel 3 only. Increase your stakes to 75 or 100 coins per spin, with the Buster Bet feature, and it can also hit on reels 2 and 4.

The star attraction in this performance is the Mighty Free Spins feature which is triggered in the usual manner by landing 3 or more scatters on the same spin. After a payout of 2, 10 or 50 times your bet, you’ll go on to play 10 free spins.

These take play on an expanded, 8-high set of reels that offer 32,768 ways to win. A single strike of Buster’s hammer could bring up to 8 wilds into play on each active reel. If you’re playing with the middle 3 reels live, then a possible 24 extra wilds could hit on any free spin.

The sound and visuals here are very well put together and there’s enough going on in the gameplay to keep things interesting. It’s fairly spiky on the variance front too. The volatility is in the medium to high range with top wins of 8,704 times your bet on every free spin! Buster Hammer Carnival is an enjoyable new arrival – if you liked the original, expect more of the same here.

If you fancy giving Buster Hammer Carnival a spin, then LeoVegas Casino is the only place you’ll find it. New players at LeoVegas are eligible for a welcome package that offers 20 free spins with no deposit required. There’s also a 100% bonus on your first 4 deposits, up to £400 plus another 20 bonus spins each time. That takes the potential number of free spins up to 100. 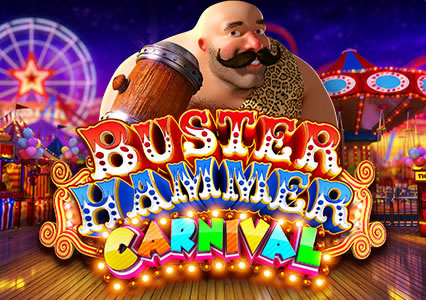