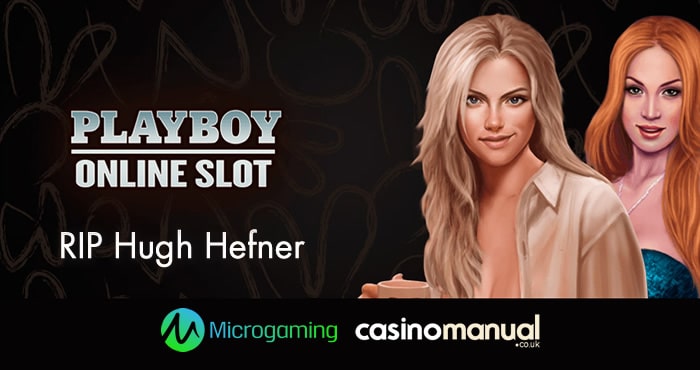 Yesterday saw the passing of the iconic Hugh Hefner who died at the age of 91 in his home, the Playboy Mansion – celebrate his life by playing the Playboy video slot.

Hugh Marston Hefner was an American icon who founded the Playboy magazine back in 1953 – the first edition featured Marilyn Monroe who will be buried next to. The magazine became the world’s largest-selling men’s magazine with 7 million copies being sold a month in its heyday.

As a result of Hugh’s work and influence, Microgaming developed a Playboy video slot – the 5 reel, 243 ways to win game can be played on all devices from 30p a spin and is based on the men’s magazine. With Playboy bunnies on the reels, the Wild symbol doubles your win when forming part of a winning combination.

Playboy comes with 4 free spins features which are based on 4 Playboy bunnies – you will first play the Kimi Bonus feature which gives you up to 20 free spins with a 5x multiplier. Once you’ve triggered the bonus feature 5 times, you will get access to the Sofia Bonus feature – here you’ll receive 15 free spins with the Running Wilds feature. On every free spin, the wild stack grows by 1 wild per reel.

Playboy is like the iconic Thunderstruck II and Immortal Romance video slots in terms of gameplay – high variance, you can win up to 8,100 times your stake on each Kimi or Ashley free spin! Check out the Playboy video slot review for full details.

Playboy can be played at Mr Smith Casino – as well as 100s of other games to play, CasinoManual.co.uk readers are welcomed with an exclusive 200% match bonus up to £200 plus 20 free spins on NetEnt’s Blood Suckers II. Deposit just £100 to get £200 free and your free spins.