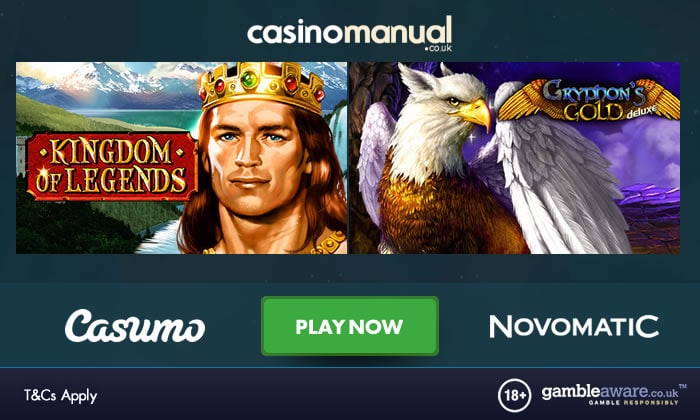 Casumo Casino has added a whole host of Novomatic video slots to their offering including Gryphon’s Gold Deluxe & Kingdom of Legends.

There are now over 120 Novomatic video slots at Casumo Casino – some of the new additions include Book of Stars, Grand Jester, Jester’s Crown and Pharoah’s Ring. However, I recommend you take a look at the following two:

Gryphon’s Gold Deluxe comes with 5 reels and 10 paylines – it is playable from just 10p a spin on just desktop (PC/laptop) devices. Based on the mythical half lion/half eagle creature, the wild symbol doubles your outcome when part of a win – to the tune of 900 times your total bet!

The main attraction is the Free Games feature where you will begin with 15 free spins and all wins trebled – you can also retrigger the feature with a cool 30 free spins in total available (each with a 3x multiplier attached). Highly volatile, this is also a land based favourite.

Kingdom of Legends is a 15 reel, Scatter Pays game that can be played from 10p a spin on all devices. With a medieval/royalty theme, this simple looking game is all about getting as many of certain symbols as possible – you can win fixed jackpots if you get 15 of a symbol with the king giving you more than 2,000 times your stake!

There’s also a Free Games feature where you will receive up to 300 times your stake (for 5 crown scatters) and 10 free spins – 1 symbol is then selected, at random, to become the Bonus symbol. When this appears, it remains sticky for the duration of the feature. This will allow you to fill the reels with the same symbol – let’s just hope it’s a high value one.

Further to the above, Casumo Casino has added all the latest video slots in the last few days – you have IGT’s Baywatch, Yggdrasil Gaming’s Jungle Books, Quickspin’s Mayana and NetEnt’s Blood Suckers II to name but a few.

Not got an account? You’re welcomed with 20 no deposit Starburst free spins for starters – then there’s bonuses on each of your first 5 deposits with 180 more free spins once you make your first deposit. That can give you up to 200 free spins and up to £1,200 in bonus money.