We’ve been a bit light on new releases from Novomatic over the past few weeks but head on over to Casumo Casino and you’ll fine a pair of shiny new titles in the form of 13 and Cops ‘n’ Robbers Vegas Vacation.

Feeling lucky? Then you’ll want to have a look at 13 which celebrates all things superstitious. It’s a simple 5 reel, 10 payline game where you’ll see voodoo dolls, tarot cards, mystery mirrors and crystal balls spinning around the reels alongside a witch who is the wild.

Like many Novomatic games, there isn’t a huge range of bonus features on offer. In fact, the only extra is a Free Games feature. Appropriately enough, you’ll receive 13 free spins once it’s triggered. The wrinkle here comes from the wilds. If they hit but don’t form part of a winning line, they lock in place until they do so. Hope to see the black cat too which adds an extra spin to your total every time it lands.

Featuring better design than some of Novomatic’s earlier efforts, 13 offers the usual blend of simple gameplay and high variance action.

The second new arrival is the third outing in the Cops ‘n’ Robbers series. The bright lights of Sin City are the setting for Cops ‘n’ Robbers Vegas Vacation which once again sees Burglar Bert do battle with Sergeant Bell.

This 5 reel, 20 payline game offers plenty of opportunities to make off with plenty of swag. There are 4 modifiers that award a new symbol drop, trails of wilds, matching reels or moving wilds. Cops ‘n’ Robbers Vegas Vacation also comes with 4 bonus features. On offer is a pick me round, free spins with 1 wild added on each, a cash trail and free spins with a 2x multiplier.

At first glance, you wouldn’t recognise this as a Novomatic video slot. The visuals are a step up from many of the developer’s more basic offerings and there’s a huge range of extras. If you enjoyed the previous games in the Cops ‘n’ Robbers series, you should find plenty to like in Vegas Vacation.

Both 13 and Cops ‘n’ Robbers Vegas Vacation are available to play at Casumo Casino. They have video slots from many providers including over 135 from Novomatic! 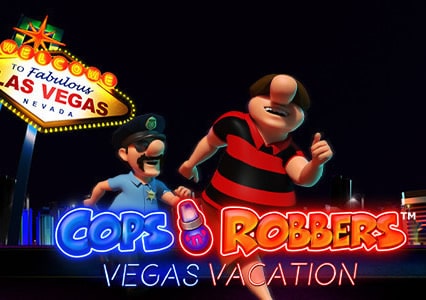