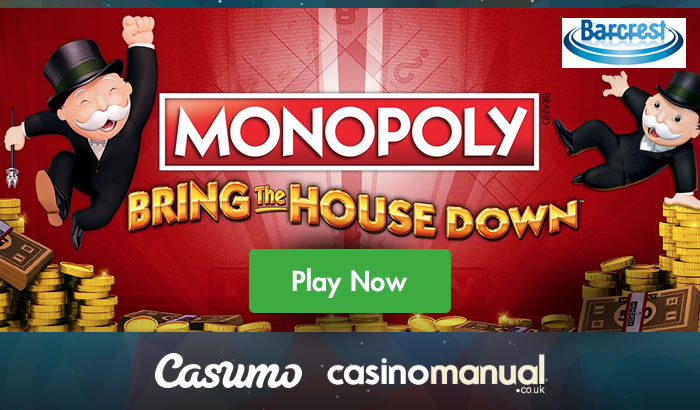 Players at Casumo Casino can take a virtual spin around the most famous board in the world in Monopoly Bring The House Down.

Created by Barcrest, it’s a 5 reel, 40 payline video slot that comes with high-end sound and visuals and a whole host of extras. The design in Monopoly Bring The House Down will be familiar to anyone who has ever played the board game – symbols include the ship, car, dog and cat spinning around the reels as well as the usual lower value symbols. So far so standard. The features are a little unusual to say the least.

They include overlay green houses that turn symbols wild and overlay red hotels that turn symbols wild as well as boosting wins with multipliers of up to 5x. There’s also a free spins round where wild houses and hotels remain locked in place. Pick a Chance card for more overlay wilds and multipliers. In the Bonus Selector, you get to stick or twist on an awarded overlay pattern. In the Bonus Drop, wild Hot Zones can drop onto the reels even if they land above.

And if all that isn’t enough to whet your appetite, there’s also Barcrest’s usual Big Bet options which allow you to up you stakes and in the process choose from the Community Chest cards to win the following modifiers: instant cash win, guaranteed winning spins, extra spins, hotel upgrades with 2x, 3x, 4x and 5x multipliers, locked wilds and lower value symbols removed from play. You’ll then play your 5 linked spins with the extra goodies in place.

Barcrest’s latest game offers some unusual gameplay which makes it a good pick if you’re looking for something fresh from a standard fruity. For more details, check out the Monopoly Bring Down The House video slot review.

New players can join Rich Uncle Pennybags at Casumo Casino with a deposit on your first 5 deposits worth up to £1,200. You’ll also be in line for 20 free spins for the 10 days following your registration.