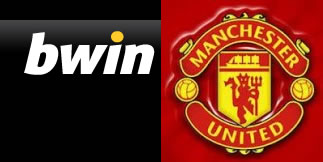 Bwin has signed an agreement with Manchester United football club to be the official betting and gaming partner for the 2012-2013 season.

The agree sees Bwin replace Betfair as the official betting and gaming partner – Betfair were Manchester United’s partner for the 3 previous seasons. Previous to that Betfred, who operate Betfred Casino, were the club’s sponsors. A statement from Bwin.Party read:

“With Manchester United, bwin.com has enlarged its international sponsorship portfolio. As the official online gaming and betting partner, bwin.com has numerous online sponsoring rights, which fit perfectly with bwin.com products. Manchester United is famous for its international fan community. The club has more than 25 million friends on Facebook and over 200 official fan communities in 24 countries.”

The agreement will surely see Bwin.com’s name and brand being exposed to a huge fan base across the UK and the World. Bwin.com is a big operator but will now grow seeing that they will have TV exposure on main stream UK and European television. Bwin.com also have their brand on Real Madrid’s shirts so arguably have agreements with the 2 biggest club teams in football.

Whilst Bwin may now be an official Manchester United sponsor, it doesn’t guarantee them a spot on CasinoManual.co.uk. Their casino is not up to standards so they won’t appear here any time soon. However, I highly recommend you look at bet365 Casino – the owners also own Stoke City football club.

Powered by Playtech software, you have great slots such as The Mummy, the recently launched Gladiator Jackpot and the Marvel slots (Fantastic Four, Iron Man 2 and The Incredible Hulk for example). They have a 150% welcome bonus up to £150 meaning that if you deposit £100, you will get £150 free. Just use the offer code BONUS100 when depositing to qualify.