If love films, you’re in luck as Blueprint Gaming has created a video slot based on a 90s cult movie – read all about the feature-packed Mars Attacks.

Mars Attacks joins a long list of movie-inspired video slots from Blueprint Gaming – they have released Ted (based on the naughty/rude talking bear) and The Goonies (needs no introduction) in recent months. Anyway, with 5 reels and 20 paylines, it can be played from just 10p a spin across desktop, mobile and tablet devices.

With the White House in the backdrop, Mars Attacks comes with 5 randomly triggered Martian modifiers in the base game – they will reward you with extra wild symbols, symbol removals for new symbols to come in, mystery transforming symbols and streak respins. The best is the Mega Shrink Ray feature as you will play on a 3,125 ways to win reel set for enhanced winning potential.

There are also 5 main bonus features – you click on the world map to decide which feature you will play. There are 2 pick me style games and 3 free spins games. In the latter, you can get DNA wilds that expand height wise after every free spin as well as Roaming Robot Wild reels that shift with each free spin.

The most lucrative feature is the Final Stand feature where you’ll get unlimited free spins – look out for Humans on reel 2 as they increase the multiplier whilst Martians on reel 4 remove lower value symbols. You can also benefit from a Big Money Boost if the Humans win which can be up to 1,000 times your bet.

Mars Attacks also gives you the chance to win 3 progressive jackpots – part of the Jackpot King network, your aim is to collect crowns. If you get 15 or more, you will spin the wheel to win big cash prizes or a jackpot – the Grand Jackpot is life-changing! For more info, read the Mars Attacks video slot review and/or watch the official video trailer below:

I recommend you play Mars Attacks at Casumo Casino – this is because all the latest video slots including WMS’ Battleship Direct Hit, NextGen Gaming’s La Bomba and NetEnt’s Vikings. They also offer you Journey of the Gods and Grizzly Gold from Blueprint Gaming exclusively!

New UK players are welcomed with 20 no deposit free spins on NetEnt’s Starburst. Then there’s a generous 100% first deposit bonus up to £300. They also offer you a series of festive themed promotions where big cash prizes can be won. 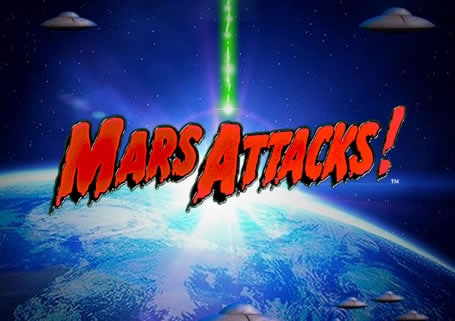