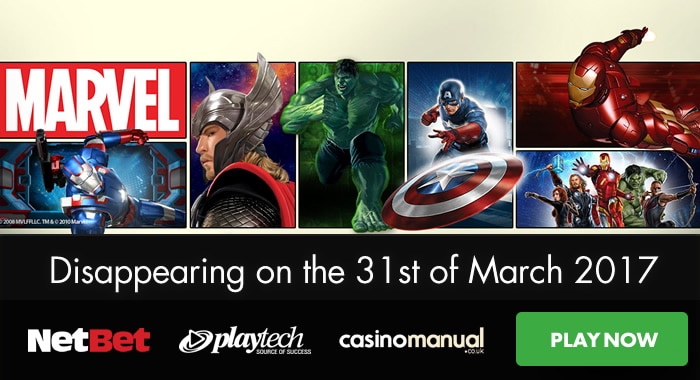 Further to our article during Christmas, Playtech has announced that their popular Marvel series video slots will no longer exist as of the 1st of April 2017. Play them now before they are gone forever!

The Marvel series video slots have arguably been the most popular group of video slots over the last few years – they have superb graphics, excellent bonus features and offer you to chance to randomly win 1 of 4 progressive jackpots.

Playtech knew this day was coming as Disney (who own Marvel) don’t want their branded associated with the online gaming industry. Playtech has since launched the Age of the Gods series which have very similar bonus features and attributes but with a Greek mythology theme. Recently, they’ve also launched the Batman series and DC Comics games including Man of Steel, Superman The Movie, Superman II and Green Lantern.

Anyway, here’s a summary of the best Marvel series video slots – play them before they are gone for good:

With 5 reels and 30 paylines, Thor The Mighty Avenger has 3 game modes with 2 of them giving you free spins. There’s unlimited free spins with frozen winning combos and burning symbols with double wins. There are also 2 wild symbol features in the base game where you can benefit from stacked wilds with re-spins and up to 5 wilds with a re-spin.

With 5 reels and 50 paylines, The Incredible Hulk has an Expanding Hulk feature where he can expand on the 3 central reels with a re-spin. The Smash Bonus feature sees The Hulk destroy police cars to win cash bonuses and smash helicopters to apply a multiplier up to 5x to those winnings. There’s also a Free Games feature where you’ll benefit from a 3x multiplier on infinite free spins.

Spider-Man Attack of the Green Goblin

With 5 reels and 25 paylines, Spider-Man Attack of the Green Goblin benefits from 7 bonus features! There are 3 free spins features with the Rivaling Free Games feature giving you unlimited free spins with a multiplier that can reach 5x. There’s also randomly triggered features in the base game with the Spider-Man Wild feature turning up to 4 symbols into extra wilds for a spin.

With 5 reels and 20 paylines, Captain America The First Avenger is all about the Super Energy Free Games feature where you begin with 4 free spins. You pick shields to win up to 12 extra free spins, multipliers up to 3x, a feature retrigger, up to 2 expanding wilds and Hero & Villain Super Spins with huge wins on offer.

With 5 reels and 20 paylines, Daredevil has a Bullseye feature where you can win cash prizes when the Daredevil symbol lands under bullseye target. It also has a Free Games feature where unlimited free spins can be won with up to 3 symbols turning into wilds on every free spin.

With 5 reels and 20 paylines, Ghost Rider has a Ghost Hunt Bonus feature where he shoots ghosts from his motorcycle to give you cash bonuses. The Free Games feature gives you infinite free spins with a 3x multiplier. The Ghost Rider also becomes an expanding wild during the free spins.

With 5 reels and 50 paylines, Iron Man 2 comes with 2-high stacked symbols on the reels. There’s a Free Games with Increasing Multiplier feature where you get 10 free spins with the multiplier beginning at 2x – with every 2 free spins, the multiplier goes up by 1. Reaching 6x, there’s an extra wild in the middle position of reel 3 to help wins.

With 5 reels and 25 paylines, Wolverine has single, double and triple stacked wild symbols on all 5 reels. The Berserker Rage feature benefits from up to 5 extra wilds or 2 wild reels with a re-spin following. The Adamantium Free Games feature gives you 12 free spins with the Adamantium tank freezing wilds.

With 5 reels and 50 paylines, X-Men comes with The X-Feature where any of the hero symbols occupy an ‘X’ shape on the middle 3 reels to give you a cash prize. The Free Games feature gives you unlimited free spins in Heroes Mode and 8 free spins in Villains Mode – you can jump between them for lots of free spins.

So, this is an end of an era for Playtech and many video slots players – the Marvel games have been extremely popular and I for sure will miss them dearly. Until they disappear at the end of the month, you can play them all at NetBet Vegas. New players are welcomed with 10 no deposit free spins on a choice of popular Playtech games as well as a 100% match bonus up to £500.