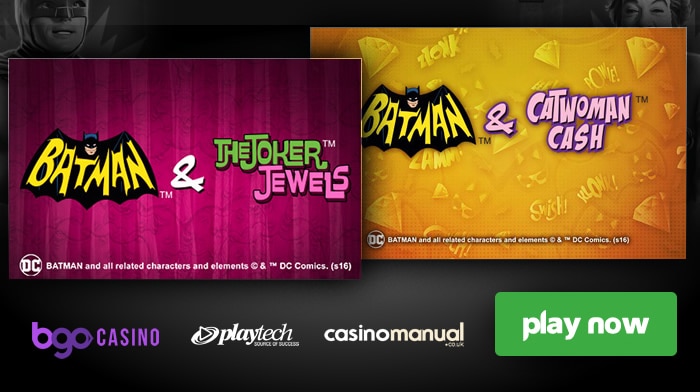 bgo Casino are the first online casino to release new Batman themed video slots from Playtech – read all about Batman & The Joker Jewels and Batman & Catwoman Cash and watch them in action.

Playtech announced back in February this year that they had signed a multi-year licensing agreement with Warner Bros. Consumer Products (on behalf of DC Entertainment) to develop video slots based on the Batman classic television series from the 1960s, Green Lantern, Superman 1 and Superman 2.

The first 2 games from this deal as now live at bgo Casino with Batman & The Joker Jewels and Batman & Catwoman Cash available. Both are them are progressive jackpot slots and have comic book, retro style graphics featuring clips from the original series – here’s a summary of the 2 new titles:

Batman & Catwoman Cash has 5 reels and 25 paylines and can be played on all devices from 25p a spin. It benefits from a Vat Burglar Bonus feature where you will be rewarded with a cash bonus or an increase to the multiplier to be used in the Batman vs Catwoman Free Games feature.

In the free spins feature, there’s up to 25 free spins to be won with a 2x multiplier. As well as having super stacked symbols, you can win cash bonuses or a 2x multiplier for the 24 base game spins that follow the feature. For more details, read the Batman & Catwoman Cash video slot review. To see the game in action, watch the official trailer below:

Batman & The Joker Jewels also has 5 reels and 25 paylines and is available on multiple devices from 25p per spin. Look out for The Joker in the base game as he randomly triggers The Joker Random Wilds feature to add up to 9 additional wilds to the reels.

The Batman vs The Joker Free Games feature gives you unlimited free spins – keep your eye on the Bat-Tastic Multiplier Meter as this increases the multiplier up to 5x. The free spins only end when you land on the ‘End’ segment with the multiplier meter. For full details, check out the Batman & The Joker Jewels video slot review. To see the features play out, watch Playtech’s YouTube trailer below:

bgo Casino is fast becoming THE place to play Playtech video slots – this is because they are releasing new games, such as The Flintstones, Age of the Gods Fate Sisters, Buffalo Blitz, Miss Fortune and Neon Life, before anyone else.

They welcome new UK players with 20 Starburst no deposit free spins. As a CasinoManual.co.uk reader, you will get an enhanced 200% welcome bonus up to £400 – i.e. deposit £200, get £400 free. Use the code 400NEW when depositing though! Once you do so, you will get 180 more Starburst free spins.

Get started now at bgo Casino