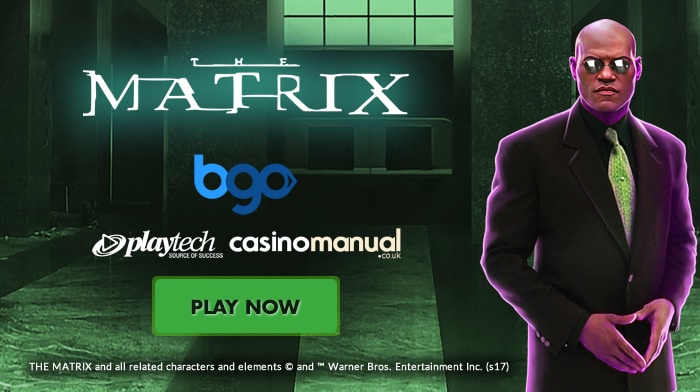 bgo Casino is already home to a good range of branded movie-themed content and it has added to the collection with the launch of The Matrix.

Based on the classic 1990s sci-fi film starring Keanu Reeves, it’s a 5 reel, 50 payline game powered by Playtech. As you’d expect from a high-profile film tie-in, design here is high end and will be instantly recognisable to anyone who has seen the movie.

One of these wilds can land on reel 5 only – when it does land fully stacked, you’ll trigger the Déjà vu Shuffle feature. The stacked wild is cloned on reel 1 and the reels shuffled. A new payout then follows.

The Matrix also comes with 2 free spins bonuses. In the Agent Smith Free Games feature, extras strips of the high value Agent Smith symbol are added to the reels, making it that much easier to land a big winning combo.

In the Nebuchadnezzar Free Games feature, look out for the sentinel wilds (the spider like creatures) which lock in place when they hit. You get to keep on spinning until you have 6 sticky Sentinel wilds in play.

The biggest star of The Matrix may well be missing (sorry Keanu fans) but there’s still plenty to like about this video slot version. The sound and visuals are from the top drawer and the range of features, though not the widest, offers some decent potential.

Fans of the film should enjoy this version. Even if you’ve not seen the movie, the combination of classy design and playable features make entering The Matrix well worth a go. Check out The Matrix video slot review for more details and to try for free.

You can play The Matrix only at bgo Casino – simply sign up to get 20 Starburst free spins right away. Then deposit up to £200 to get a 200% match – if you deposited £200 for example, you’d receive £400 free. This offer is exclusive to CasinoManual.co.uk readers and requires you to deposit using the code 400NEW.

Take me to bgo Casino