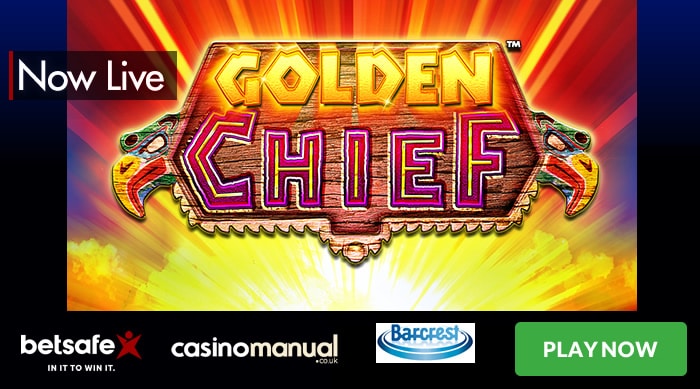 Players looking for a taste of the wild outdoors should head to Betsafe Casino which has just launched the Native American-themed Golden Chief video slot.

Powered by Barcrest, the setting here may be a barren wilderness but there’s plenty of action on offer in the form of the free spins and cash trails. The base game action takes place on a standard 5 reel, 20 payline machine.

Like many titles from this developer, it has the look and sound of a traditional brick and mortar machine. Joining the lower value playing cards are a totem pole, a wild bear, a Native American squaw and a wild that offers awards of up to 500 coins per payline. So far, so standard.

The action picks up with the arrival of the Golden Chief who is an expanding wild – whenever the Chief lands, he expands to turn the whole of that reel wild. Better still, he’ll expand the number of paylines in play from the usual 20 up to 100. The increased number of paylines also brings mystery symbol upgrades into play. This turns lower value symbols into something more lucrative.

Golden Chief also comes with 3 bonus features. After triggering, spin the wheel to reveal 5 or 10 free spins (depending on the number of scatters), the Cash Canyon trail round or the Totem Trail where the further you progress the bigger the awards on offer. Land 5 scatters on a spin and you’ll immediately trigger the jackpot payout.

Like many Barcrest video slots, you’ll also have the chance to play in Big Bet Mode. This series of linked spins will set you back £20, £30 or £50. In return, you’ll receive a selection of expanded scatter symbols, more mystery symbol upgrades, sticky expanding wilds and a 100 payline game engine active at all times.

Golden Chief is a typical Barcrest game – it’s not the most stunning as far as design goes but it does boast some impressive features, especially if you have the bankroll to play in Big Bet Mode. If you’ve enjoyed Barcrest’s previous releases, then Golden Chief offers much of the same.

Take it for a spin at Betsafe Casino where new players can get a bonus on their first 3 deposits worth up to £1,000. Also on offer are free spins and big spins worth £1 each on the classic exploration-themed Gonzo’s Quest video slot.

Take me to Betsafe Casino