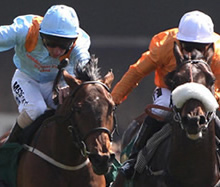 In light of Betfred making a big for the Tote, Betfred has revealed that it will invest £11 million in horse racing in 2012 as well as a minimum of £9 million for the following 6 years.

Betfred have reportedly bid around £200 million for the Tote. Fred Done, owner of Betfred, stated that “Betfred is the best possible business partner for Racing as it is best placed to unlock the value of the Tote”.

There is a concern that Betfred only want to add Tote’s betting shops (over 500) to its current offering. Fred Done went on to say that they have a “40 year track record of delivering growth and creating jobs”. He also said their offer was “fully financed and we have everything needed to conclude a transaction now”.

On Casino Manual, we have recently just reviewed Betfred Casino – they offer a Playtech powered casino with over 200 casino games to choose from. Check out our in-depth review here.