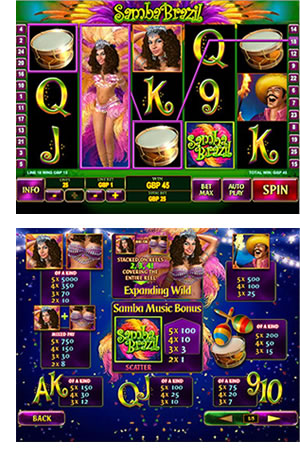 Betfred Casino have launched the Samba Brazil slot game – read about the Playtech slot and watch a video preview below.

Samba Brazil is a 5 reel 25 reel Playtech-powered slot game based on the Brazilian Samba girls. You can play from 25p to £125 a spin and it comes with 3 bonus features to keep you entertained. Firstly, there is a Mixed Pay feature where you need to look out for 2 particular symbols. When you get any mixed combinations of the 2 symbols on an active payline, you can win up to 750 times your stake! This feature is available both in the base game and Free Games feature.

There is an Expanding Wild feature where the Samba Brazil woman symbol and the boobs symbol appear stacked on reels 2, 3 and 4. When 3 identical symbols occupy 3 positions on a single reel, the reel expands to form a winning combination. This occurs both in the main base game and in the Free Games feature.

Then there is the Samba Music Bonus feature which is triggered by getting 3 or more Samba Brazil scatters. A screen with 12 maracas appears – you win a cash prize up to 5 times your stake, between 5 and 8 free spins per maraca and a multiplier ranging from 2x to 3x. During the Free Games feature, getting 3 Samba Brazil symbols will reward you with a further 10 free spins – these can be won indefinitely!

Betfred Casino offers you both a download and instant play Playtech-powered casino with over 200 slot games on offer. Some of most popular slots include Iron Man 2, Great Blue, The Mummy and recently released Marvel slots, Ghost Rider and Thor The Mighty Avenger. Betfred Casino are always to first to release new Playtech slots too!

Exclusively for CasinoManual.co.uk readers, Betfred Casino offer a 100% welcome bonus up to £100. You can deposit from £15 to £100 to get a 100% match. The standard bonus is higher but is not cashable once the wagering requirements are met. Regular players love the fact they process withdrawals between 12 and 24 hours including weekends. You can also make use of over 840 betting shops across the UK to deposit or withdraw funds.